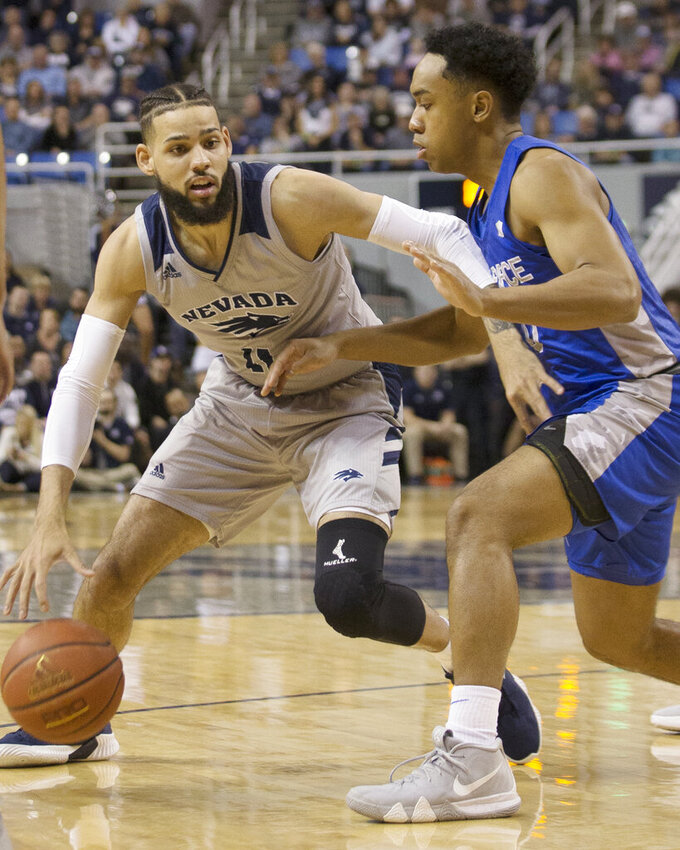 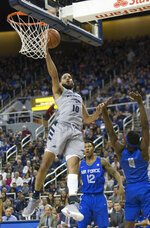 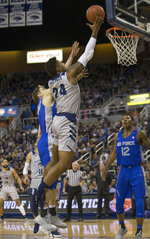 RENO, Nev. (AP) — Eric Musselman hinted at looking into a new offensive approach for No. 10 Nevada despite a 15-point win.

"Our guys got to start making 3s because we've tried everything," the fourth-year Nevada coach said. "We've got to start taking less 3s if we are going to keep shooting this way. We can't keep trying to shoot our way out of it. We have to have better shot selection and the ball has to go inside more."

Nevada (18-1, 5-1 Mountain West Conference) had its second-lowest point total of the season. The Wolfpack had a 20-point first-half performance, and trailed Air Force (7-11, 2-4) by four at halftime — but pulled away in the second half for another victory.

Nevada shot 5 of 27 from beyond the arc after entering the game ranked No. 219 in the nation in 3-point percentage.

"It's frustrating," said Caleb Martin, who had 10 points. "With the character of our guys, everyone is hard on themselves. It's nothing new for guys to get down on themselves whenever they miss their shots, including myself. I don't think it's making us play more timid. It's not making us play any different."

Trey Porter scored 11 points, and Caroline and Cody Martin each had eight rebounds as Nevada outrebounded Air Force 39-31. The Wolf Pack also outscored the Falcons in the paint 36-18, and Air Force committed 21 turnovers to Nevada's 14.

"Being able to turn the switch and turn it on in the second half was really good," Porter said. "Our goal as basketball players is to put together a full 40 minutes, and obviously we didn't do that today."

"I thought punch for punch and pound for pound, we matched their intensity, their toughness, their effort," Air Force coach Dave Pilipovich said. "We showed a lot of grit tonight. ... In the second half, the turnovers hurt us with the stretch they had and the run they went on."

Air Force: The Falcons, a 22-point underdog Saturday, frustrated Nevada's offense and held the Wolf Pack to their second-lowest point total this season. Even in a loss, the Falcons, still winless on the road this year (0-6) led the majority of the game against a top-10 team.

Nevada: It wasn't pretty Saturday, but the Wolf Pack pushed their Mountain West win streak to four and moved into sole possession of first place in the conference.

Caroline moved to eighth on Nevada's career scoring list, passing Ric Herrin (1989-93). In his third season at Nevada after transferring from Southern Illinois, Caroline has 1,527 points with the Wolf Pack and (1,830) in his collegiate career.

Air Force fell to 4-84 against ranked opponents. The Falcons have six wins in their last 59 road games.