NBA prospects get another college incentive with paid deals 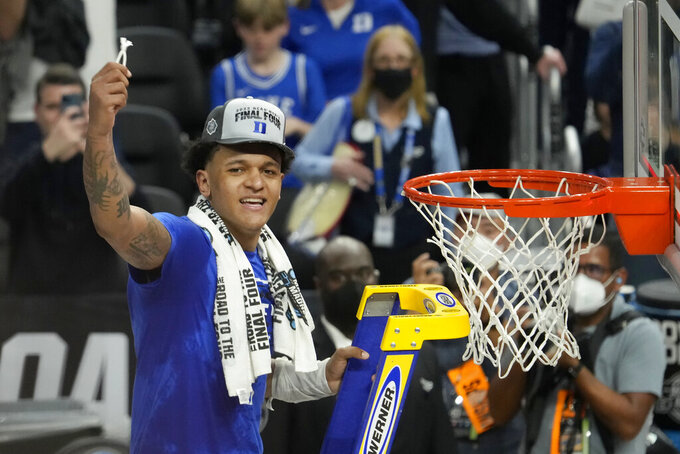 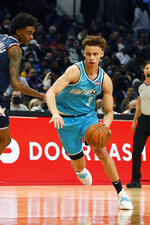 The Australian teenager won't feel like he is missing out, though.

“I love watching college basketball and the NCAA Tournament, it’s huge,” said Daniels, a 6-foot-7 point guard who joined the G League Ignite developmental program for elite NBA prospects. “It’s one of the biggest tournaments in the world. But for me, my goal was to get to the NBA.”

Daniels, 19, is among a growing number of players opting to bypass college basketball to pursue what they see as more training-focused and financially lucrative alternative routes to the pros.

That means they were saying “no thanks” to being part of March Madness — which up until recently did not come with the opportunity to profit from use of a player's name, image and likeness (NIL).

The options for top pro prospects have changed dramatically in a relatively short time. They can go overseas, play in the second-year NBA-affiliated Ignite program or the first-year Overtime Elite developmental program.

And the evolving world of bustling financial opportunities created last summer when the NCAA allowed athletes to cash in on their fame while in school gives them something else to consider.

“I think that there's enough room for all of us,” said Aaron Ryan, Overtime Elite's commissioner and president.

Ryan may be right. It seems to be working out for those who skipped school and for the trio of college players considered to be the top NBA draft prospects.

The 6-10 forward from Seattle said he was approached about playing in the G League or overseas. He opted to fulfill his dream of playing college basketball, with that growing sweeter as endorsement opportunities rolled in before he ever played a game.

Those have included Banchero becoming the first college player featured in the latest NBA 2K video game, a basketball trading card from Panini as part of a multi-year deal, an ad with British sports-fashion retail company JD Sports.

Holmgren also has deals such as with Topps trading cards, while Auburn’s Jabari Smith – another top freshman pro prospect – has his own T-shirt collection with 2 Commas Clothing.

“College can definitely become more and more enticing just because now you can make money and go to college as well,” Banchero said. “So I think it’s a good thing.”

The options change a bit for players who don't play in college basketball's wide-exposure spotlight that comes with every NCAA Tournament. Then again, missing March Madness didn't hurt Houston Rockets rookie Jalen Green, the No. 2 overall draft pick by the Houston Rockets and one of three Ignite players to be drafted last summer.

“I don’t regret it,” Green said. “But I'm sure it would have been fun. That's something every college player is waiting for, and it's lit in the arenas.”

This year's crop of players bypassing college are the first to do so knowing that they were clear to make some profit from endorsements in school. However, a year ago no one really knew how this would all play out, and where it's headed is still unclear.

Dominick Barlow, a 6-9 forward from New Jersey, opted to play with Overtime Elite and said he has been more focused on developing his game than an NIL portfolio.

“You have every single resource possible to become a pro here,” said Barlow, ESPN's 58th-ranked draft prospect. “So I think it's a no-brainer personally. I know some people have attachments to college basketball. So be it. But if you really love basketball, you should come here.”

As for Daniels, he figures he couldn't have made NIL money had he played at Arkansas, Colorado, Houston or other schools that had recruited him because student visas prohibit off-campus work. And he also knows there was no guarantee to reach the NCAA Tournament. Fellow Australian Ben Simmons, a former LSU standout and current Brooklyn Nets guard, failed to get there in his one year with the Tigers.

But Daniels sees how NIL opportunities could change the way prospects view college basketball in their NBA pursuits.

“I think in today's (game), being able to make money is a big thing,” he said. “Some kids see money as a huge opportunity to be able to provide for themselves and their families and stuff like that."

Ranked as ESPN's No. 10 draft prospect, Daniels said he has added 20 pounds of bulk since joining Ignite to handle playing older pros in NBA rules and systems. That growth is why, as much as he loves watching college basketball, he won't be wistful about missing out as the Final Four tips off Saturday night.

“It would've been great to play in it, but there's no regrets for me," he said. "There's definitely no regrets.”