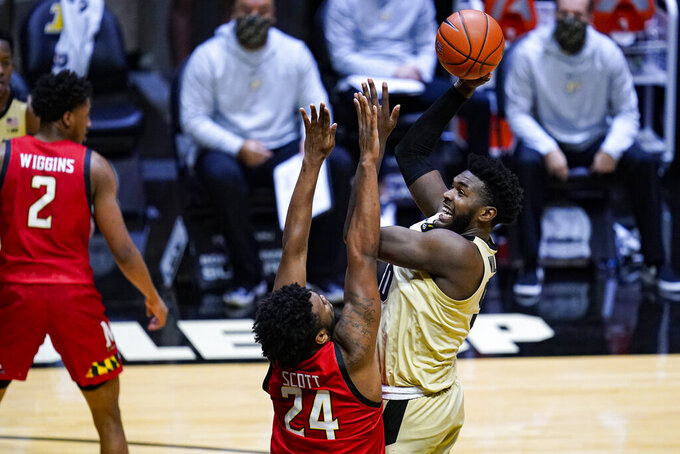 Hunter was credited with a basket after a goaltending call with 38.4 seconds left to give Purdue a 72-70 lead, and the teams combined to go 1 for 6 from the free-throw line the rest of the way. Hunter missed two at the stripe with 1.8 seconds left and Donta Scott did not hit the rim on a full-court heave at the buzzer.

Jaden Ivey had 11 points and Trevion Williams added 10 with eight rebounds for Purdue (7-3, 2-1 Big Ten). The Boilermakers won their 50th conference game at home since the 2014-15 season — ranking first in the Big Ten.

Four different Purdue players made a 3-pointer during a 14-2 run to take a 25-10 run. The Boilermakers made seven of their first ten shots from distance, and led 41-28 at halftime behind 10 points from Hunter. Purdue finished the game making 10 of 22 behind the 3-point arc — with three from Newman.

Scott had 15 points and eight rebounds for Maryland (5-3, 0-2), which never led. Aaron Wiggins added 14 points and Eric Ayala 13. The Terrapins only turned it over five times — a game after recording just four times against La Salle for the fewest in the Mark Turgeon era.