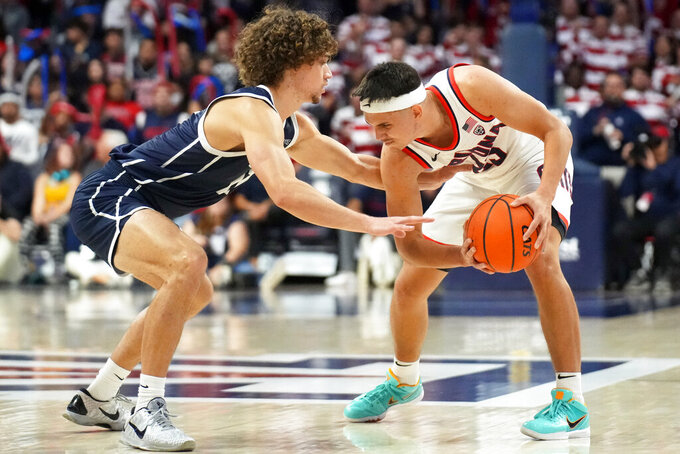 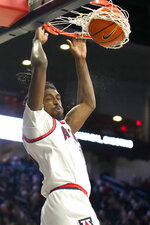 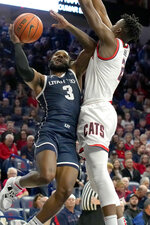 Coming off a triple-double in his previous game, Kriisa was 6 of 7 from 3-point range and 6 of 6 at the foul line while adding four rebounds and five assists. Last week against Southern, the junior point guard had 14 points, 11 rebounds and 12 assists for his second career triple-double, becoming the third player in school history to do it multiple times.

“I guess if you take some extra reps then they actually go in more often,” Kriisa said.

“I’m trying to be consistent with hunting my shot,” he said. “I’m up and down with my shot (selection). Some games I take two shots and other games I take eight shots. I’m trying to find a good balance, so it’s no surprise for my teammates if I take more shots.”

Azuolas Tubelis and Cedric Henderson Jr. each had 20 points for the Wildcats. Oumar Ballo added 16 points and 11 rebounds as Arizona (3-0) topped 100 points for the second time in three games. The Wildcats were 12 of 22 from beyond the arc and shot 63.6% for the game.

Henderson was 8 of 11 from the field after scoring only eight points in his first two games since transferring from Campbell.

Utah Tech (1-3) got 13 points from Noa Gonsalves and 12 each from Frank Staine and Dancell Leter but shot only 36.1%. The Trailblazers made 13 steals, converting 19 Arizona turnovers into 21 points.

Arizona led 49-21 at halftime despite 12 giveaways, shooting 62% from the floor and grabbing five more rebounds than Utah Tech had points. The Trailblazers surpassed their first-half scoring total less than nine minutes into the second but couldn’t get the deficit below 23 at 78-55 with 8:23 to go.

“I thought second half we kind of started to fight a little bit,” coach Jon Judkins said. “First half it looked like we were a little bit scared, and we can’t have that when you come to an arena like this. It’s packed and it’s loud, it’s gonna happen, but that’s why we play them and hopefully we learn from this and get better and watch film and try to do a better job.”

The Trailblazers missed 18 of 19 shots during one stretch, shooting just 18.7% in the opening 20 minutes.

Utah Tech: The Trailblazers are in their third year of the four-year transition period after moving up from Division II, but this is the first season under their new school name. In July, the university officially changed its name from Dixie State.

Arizona: The Wildcats have won 22 consecutive games at McKale Center, tied for the third-longest active streak in Division I and their best since winning 49 in a row from 2013-16. The program record is 71 from 1987-92.

Arizona: Heads to Hawaii to play in the Maui Invitational, opening Monday against Cincinnati.