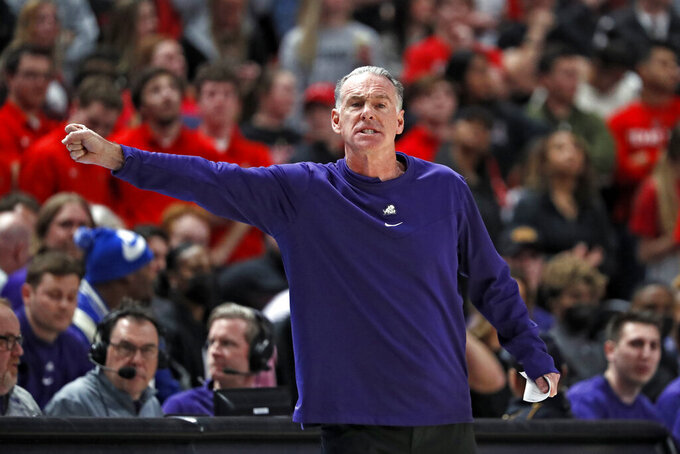 TCU coach Jamie Dixon yells to his players during the first half of an NCAA college basketball game against Texas Tech, Saturday, Feb. 12, 2022, in Lubbock, Texas. (AP Photo/Brad Tollefson)

LUBBOCK, Texas (AP) — Texas Tech guard Terrence Shannon's season started late to make sure he was eligible, and has been interrupted a few times because of back issues.

The Red Raiders hope their junior guard can stay around for good down the stretch.

Shannon scored 20 points on 7-of-9 shooting and ninth-ranked Texas Tech beat TCU 82-69 after overcoming a 13-point deficit Saturday to remain undefeated at home.

Right before halftime, Shannon had a steal and a breakaway that ended with a powerful one-handed dunk with his left hand. The momentum of that play carried into the second half.

“We have to remind myself, as well as the public, he's been injured and he's still not 100%,” coach Mark Adams said of Shannon, who missed the first three games of the season while Texas Tech made sure his NBA pursuits hadn't affected his playing status.

“He's playing, mentally and emotionally, 100%, but he can't physically play like that. We're starting to see the old TJ back, and that's certainly encouraging for us.”

Kevin McCullar made a 3-pointer with 5:06 left in the first half to start the decisive 24-5 spurt that carries into the second half. The shot came only a minute before he suffered a left ankle injury after stepping on the foot of TCU coach Jamie Dixon. A three-point play by Bryson Williams in the opening minute of the second half put Tech in front.

“Our defense wasn’t good enough early even with the big lead that we had and eventually we were going to break down,” Dixon said. “They stepped up the pressure, the aggressiveness, the physicality, and we didn’t respond.”

McCullar followed his made 3 with an assist on a fastbreak layup by Shannon, who was fouled and made the free throw. But McCullar was hurt on a missed 3-pointer with 4:06 left when he stepped back and made contact with Dixon, who was standing out of bounds along the TCU bench. McCullar put no weight on his left foot while being helped off the court and never returned.

The Red Raiders had a chance to tie or take the lead after the steal and dunk from Shannon, but Miles was fouled on a steal with a half-second remaining in the first half and made a free throw for a 40-37 lead.

“TCU was moving the ball, very disciplined,” Adams said. “Have a lot of respect for the way they came in. We were trying to disrupt them some way, and that starts with deflections and putting pressure on the ball. So, really kind of got it going like a few minutes in the first half and then that momentum carried in for most of the second half.”

TCU: The Horned Frogs had 13 turnovers after halftime, leading to 14 points for Texas Tech. The game total was 20 turnovers leading to 26 points.

Texas Tech: The Red Raiders have won 18 in a row at home, including their final three games last season.

The Red Raiders, who had a 15-point loss at Oklahoma earlier this week, could slide out of the top 10 but will still be ranked for the 10th consecutive week.

Texas Tech: At home against 10th-ranked Baylor on Wednesday night.