Outlier Cavs hoping to get to join NCAA party in Indiana 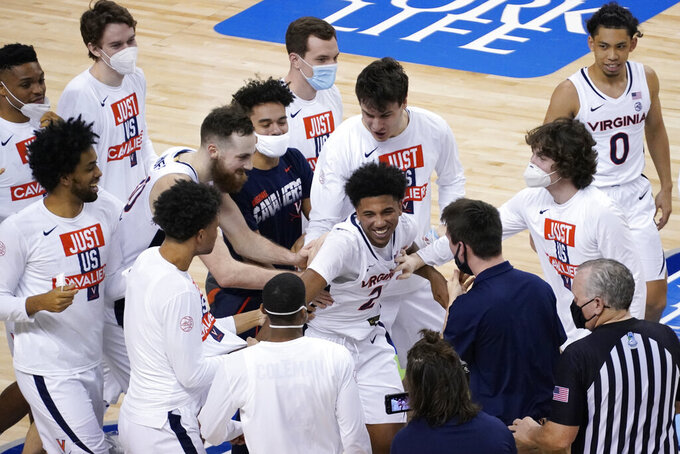 The last team to cut the nets down as Division I national champions is preparing for this year's NCAA Tournament in a way different than everyone else.

Virginia is the only team not yet in Indianapolis, the site of this year's tournament, because of a positive COVID-19 test that forced the Cavaliers to pull out of last week's Atlantic Coast Conference Tournament before the semifinals, where they were the top seed.

The Cavaliers (18-6) are seeded fourth in the West Regional and will face 13th-seeded Ohio (16-7) on Saturday night. Guard Sam Hauser said Wedneday the team's preparation has involved individual workouts and conditioning sessions and Zoom strategy calls.

If things go well, the Cavaliers will have their first — and only — practice on Friday in Charlottesville, Virginia, before departing for Indianapolis. It's not the way any team would prefer to get prepared for the marquee event to finish a most unusual season, but far better than the alternative.

The deadline for teams to be replaced came and went Tuesday night, so the field of 68 is set. If Virginia or any other team cannot play this weekend, the opponent automatically advances to the next round.

NCAA senior vice president for basketball Dan Gavitt said Virginia will still have to be tested twice and quarantine until both tests are returned negative. Gavitt said he believe Virginia will have the opportunity to get a practice in before they play.

Hauser said the rest the Cavaliers are getting could be a benefit.

"Once we step in the floor, I think the guys will be ready to go," he said.

Like Virginia, Kansas had to pull out of the Big 12 Tournament after starting forward Jalen Wilson and backup forward Tristan Enaruna tested positive before that tournament. The third-seeded Jayhawks could have starting center David McCormack available for the first round against No. 14 seed Eastern Washington.

Enaruna wouldn’t be available until after the opening weekend. Wilson's quarantine period would expire in time for him to fly to Indianapolis on Monday and play in the second round — barely.

“If we’re fortunate enough to advance, we don’t know what time the game is,” Kansas coach Bill Self said. “There are certain protocols that have to be met getting here. If it’s later in the day, that would probably help, but we don’t have any control over that.”

Baylor’s Scott Drew wouldn’t offer specifics, but said the Bears will have fun in Indy.

“We have a lot of great team bonding ideas for them. So, we’re going to have some fun here and make sure that rather than just hanging out in the rooms that we’re able to spend time with our guys,” Drew said of the second-ranked Bears, top seeds in the West.

“Nowadays, you spend so much time with your players, you better get guys you want to be around,” Drew said. "They don’t know some of the things we have in store for them, but they’re going to have fun.”

Virginia Tech's Keve Aluma was one of the top players in the ACC this season, but the Wofford transfer had one of his worst performances when the Hokies lost to North Carolina in the ACC quarterfinals.

After averaging 15.6 points and 8.0 rebounds during the regular season, Aluma had nine points and eight rebounds, leading coach Mike Young to say he looked “tentative.”

Young is certain Aluma, who followed him from Wofford and sat out last season, will be better when the 10th-seeded Hokies (15-6) face Florida (14-9) on Friday.

“I do. He’s played in this tournament two years ago vs. Seton Hall and Kentucky. He’s a hell of a player, he’s had a hell of a year and he’s going to be good on Friday," Young said.

Looking for a team with tournament experience when filling out a bracket? Stay away from sixth-seeded Southern California.

The Trojans are beyond thin on any sort of tournament experience. USC coach Andy Enfield said his coaching staff realized last week prior to the Pac-12 Conference Tournament that the Trojans had just one player on their roster who had played in either the Pac-12 or NCAA tournaments.

“Our entire team has a severe lack of tournament experience,” Enfield said. “But I think as a basketball player, you adjust pretty quickly. And I think our guys are just really excited for this opportunity, so I don’t think the moment is too big for our team.”

USC’s roster is filled with youth and transfers. The only player to have appeared in an NCAA game is Wofford transfer Chevez Goodwin, who reached the second round in 2019 after an upset of Seton Hall.

None had appeared in a Pac-12 tournament game prior to the Trojans’ double overtime win over Utah last week. And the Trojans most important player, Evan Mobley, will be playing just his 30th college game when USC faces either Wichita State or Drake on Saturday.

“I feel the spotlight on me a lot,” said Mobley, who was named second-team AP All-American on Wednesday. “But I’m just trying to stay focused and stay ready for the games.”