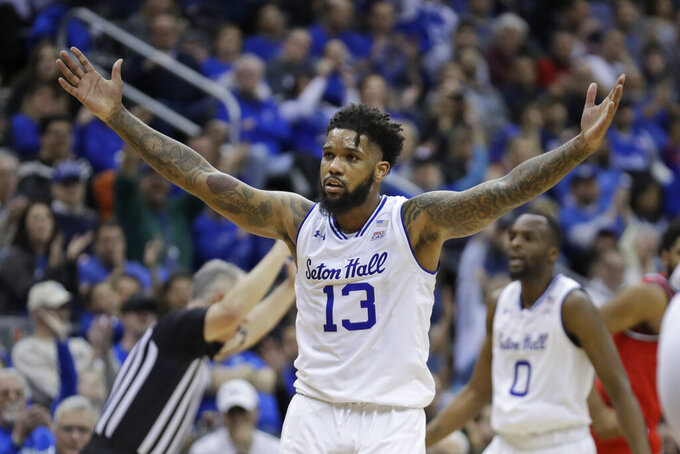 NEWARK, N.J. (AP) — In the week since coach Kevin Willard challenged Seton Hall for coming out flat at Providence, the Pirates have responded by living up to expectations.

The Pirates (20-7, 12-3 Big East) answered with two straight victories to maintain the inside track on the regular-season conference title.

Jared Rhoden added 14 points on 4-of-5 shooting and Romero Gill had 12 points while going 6 for 6 from the floor in in the wire-to-wire victory.

“We been together so long, we know our potential,” Mamukelashvili said. “And we know that if we play hard and we play defense, and rebound, we get good looks.”

The Pirates began pulling away midway through the first half. Powell threw a nifty hook pass over his shoulder to Mamukelashvili in transition, which the big man finished with a dunk to give Seton Hall a 20-6 advantage with 9 minutes to go in the half.

“When you have a big man like that, who can put the ball on the ground, shoot — it just makes everything a lot easier when people are double-teaming me,” Powell said.

“We were fortunate we were down 14 as bad as we played in the first half,” St. John’s coach Mike Anderson said. “We turned it over, we didn’t shoot the ball well, we missed five or six layups and shot a few airballs. I though in the second half we came out with a little bit more punch and fight in us.”

St. John’s chipped away and got back within single digits on a three-point play by Figueroa that made it 36-27 with 18:30 left. The Red Storm got within seven a couple of times but no closer. Seton Hall led by as many as 23 points in the second half.

“I still don’t feel like we’re at our best,” Powell said. “And I feel like March is going to be our best basketball.”

St. John’s: The Red Storm continue their struggles in the Big East in Anderson's first year. After going 11-2 in nonconference play, they’ve fallen a game closer to .500, and things won’t get any easier. St. John’s closes out the regular season at No. 12 Villanova, hosting No. 15 Creighton, traveling to No. 21 Butler and hosting No. 19 Marquette.

Seton Hall: The preseason favorite to win the Big East regular-season title took one step closer to doing just that. After traveling to Marquette, the Pirates will face two teams behind them in the standings to close out the season. They host Villanova and play at Creighton.

This was the fourth regular-season sweep of a Big East team this season for the Pirates. They have also gone 2-0 against Georgetown, DePaul and Butler. Seton Hall also has won 20 games in each of the last five seasons, a program record.

Powell had another rough game at the Prudential Center. He went 0 for 5 from 3-point range and 2 for 9 from the field in the first half, finishing 2 of 11 from beyond the arc and 6 of 18 overall. The preseason AP All-American and Conference Player of the Year will get one more game on his home floor when the Pirates host Villanova on March 5.

Powell suffered a concussion in a game against Rutgers on Dec. 14.

“After the concussion, I think, that could take some time to kind of get all your motor skills a little bit going,” Willard said. “He’s obviously 100 percent recovered from it but I do think there's some lingering effects with just technique and form, and that's kind of what we've been working on more than anything.”

Seton Hall: At No. 19 Marquette on Saturday.