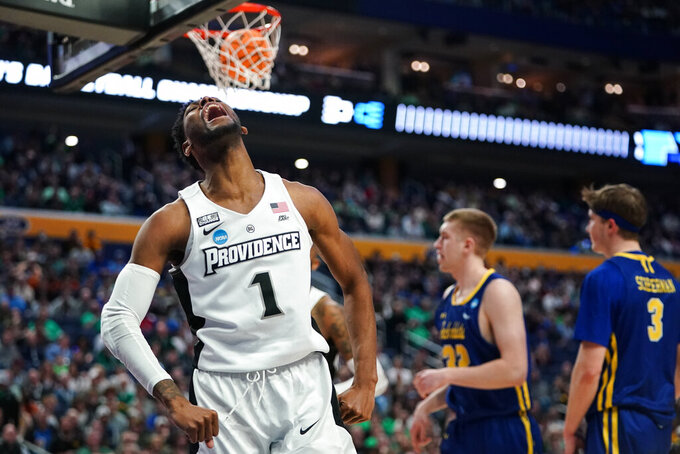 Providence's Al Durham (1) celebrates after drawing a foul while scoring in the second half of a college basketball game against South Dakota State during the first round of the NCAA men's tournament Thursday, March 17, 2022, in Buffalo, N.Y. Providence won 66-57. (AP Photo/Frank Franklin II)

So if anyone wants to call his gritty Friars lucky, that's fine by him.

Al Durham had 13 points, eight rebounds and six assists and Jared Bynum made three big free throws with 29.9 seconds left as Providence snapped the longest winning streak in the country by beating South Dakota State 66-57 Thursday in the first round of the NCAA Tournament.

The fourth-seeded Friars (26-5) advanced to face Richmond in the Midwest Region on Saturday.

“If luck is the narrative that continues to keep us connected and winning, we’ll take it,” said Cooley, who is in his 11th season at Providence.

It was a typical grind for the Big East regular-season champions. The Friars' turnaround season after going 13-13 in 2020-21 now includes 16 victories by single-digit margins.

The 13th-seeded Jackrabbits (30-6) came in on a 21-game winning streak and were a popular pick to spring the tournament’s first upset. So popular that it really wouldn’t have been much of an upset. The Friars were only a two-point favorite, according to FanDuel Sportsbook.

“You know, we hear the noise that everybody says, but we can’t let that rattle us,” Durham said. “We knew what we were capable of.”

All those close games have led to some calling Providence the luckiest team in America. The Friars like to think of themselves as a tough and poised team that makes winning plays late — as they did Thursday.

The Friars were up three in the final minute when Bynum let loose a 3-pointer with 3 seconds left on the shot clock. The shot missed, but Doug Wilson was whistled for a foul. Bynum released the ball before contact, but Wilson appeared to hit the shooter's arm and bump him before he landed.

“I thought he kicked his leg there, and I sort of ran into him, but I don’t make the calls,” Wilson said.

SDSU coach Eric Henderson put his head in his hands in frustration and then argued the call after watching it on the big screen.

Bynum knocked down all three shots to give Providence a six-point lead. Bynum finished with 12 points and Noah Horchler had 13 for the Providence.

Baylor Scheierman led the Jackrabbits with 18 points and 10 rebounds and Wilson scored 13.

Thursday marked 92 days since the Jackrabbits' previous loss, but the second-highest scoring team in the country (86.7) struggled to do what it does best: Make 3s.

South Dakota State came into the game shooting nearly 45% from long range, best in Division I in 28 years. The Jackrabbits were 7 for 23 on 3s.

The Friars made 8 of 22 3-pointers, including Horchler's jumper from the wing with 15:58 left in the second half that put Providence up 43-29. The largest lead of the game to that point had the Friars dancing on the bench and Henderson calling timeout to try to regroup.

The Jackrabbits responded with an 8-0 run and Providence was in yet another tight one the rest of the way.

The Jackrabbits were running early, with Wilson slamming home a couple of alley-oop passes and converting a behind-the-back-bounce pass from Scheierman into a layup.

The teams went almost nine minutes from the start of the game without a stoppage in play and South Dakota State led 17-15. As things slowed, Providence gained control.

South Dakota State: The Jackrabbits were making their sixth NCA Tournament appearance in just 13 years as a Division I school, but they are still looking for win No. 1.

Providence: The Friars got 15 productive minutes off the bench from 245-pound Ed Croswell, who had nine rebounds and four steals.

Providence advanced to the second round of the tournament for the first time since 2016.