Schofield leads No. 1 Tennessee to win at South Carolina 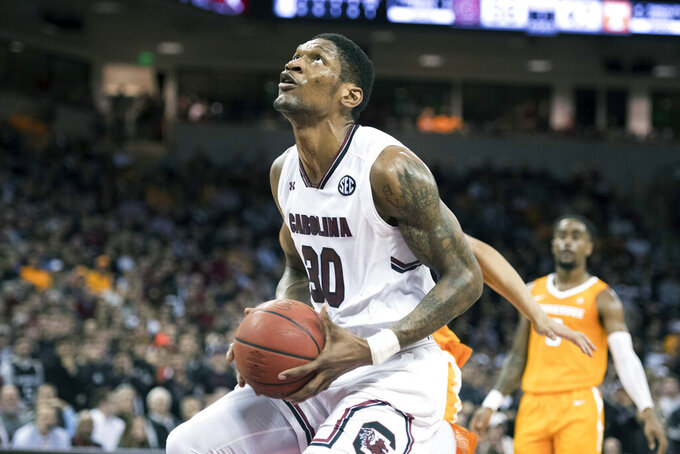 COLUMBIA, S.C. (AP) — Admiral Schofield was talking too much and missing too often. The Tennessee senior knew his game had to improve, and he started with an apology to his teammates.

"I just apologized to them for getting outside of myself," said Schofield, who had shot under 30 percent and scored nearly seven points below his average in Tennessee's past three games.

Schofield rediscovered his game Tuesday night, scoring 20 of his 24 points in the second half to lead No. 1 Tennessee to a 92-70 win over South Carolina.

Schofield went through the NBA Draft evaluation process last spring before choosing to return to help the Vols (19-1, 7-0 Southeastern Conference) for one more season. Lately, though, he thought he spent too much time talking on the court and not enough time being productive.

"Just things I've been watching in myself," he acknowledged. "This is not who I am."

The 6-foot-6 Schofield showed who he can be after the break, hitting 9 of 13 shots. The Vols saw a double-digit lead cut to 60-58 with 13 minutes to play, but Jordan Bone scored five straight point and Schofield closed an 11-3 spurt with a 3-pointer to put Tennessee ahead 71-61.

The Gamecocks (10-10, 5-2) could not close the gap as Tennessee won its school-record tying 15th straight. The Vols matched the mark from more than century ago, a run that began in February 1915 and stretched to January 1917.

Tennessee coach Rick Barnes called it the most complete game his team has played in a while. And he believes the Vols have learned how to effectively handle being the country's top-ranked team.

"I think we got through the toughest part of being No. 1," Barnes said. "I'm talking about all the attention around it."

Schofield said the newness of the ranking and of Tennessee's ongoing win streak took adjusting. Their performance against South Carolina showed they're on the right path, he said.

"I felt like we controlled things most of the game," Schofield said.

Williams scored 17 points in the opening period to move Tennessee out front by as many as 12 points. Schofield, 1 of 4 shooting the first 20 minutes, found his touch after the break in scoring nine of his team's first 13 points to keep the Vols in the lead.

Chris Silva had 28 points — only six the second half — and 10 rebounds for South Carolina, which fell to 1-13 all-time against No. 1 opponents.

The game featured two of the SEC's top post players in Tennessee's Williams and South Carolina's Silva — and the pair did not disappoint as both were practically unstoppable early on.

Silva, the 6-foot-9 senior who set his career high of 32 points against then-No. 16 Auburn a week ago, looked like he aimed to surpass that with 22 points in the first 20 minutes. Williams, a 6-7 junior and a candidate for SEC player of the year, matched Silva shot for shot before the break.

Tennessee: The Vols are fast, strong and skilled around the basket. There's a good chance they'll return to Colonial Life Arena in March as a high NCAA seed. The building is hosting tournament first- and second-round games.

Tennessee played without guard Jordan Bowden, who started the season's first five games, but has become the team's first reserve off the bench. Bowden tweaked his knee during shootaround. He has averaged 27.2 minutes and 10.9 points per game. Barnes said he learned of Bowden's absence right before tipoff. Barnes was unsure about the severity of Bowden's injury.

VIEW OF THE TOP

South Carolina has had a bird's-eye view of college basketball's best. Along with facing top-ranked Tennessee, the Gamecocks have also lost to No. 3 Virginia and No. 5 Michigan. South Carolina coach Chris Silva said the Vols are a hungry, talented team that can match up with anyone. "They play well," he said.