Stefanovic paces No. 7 Purdue in 96-67 win over Bellarmine 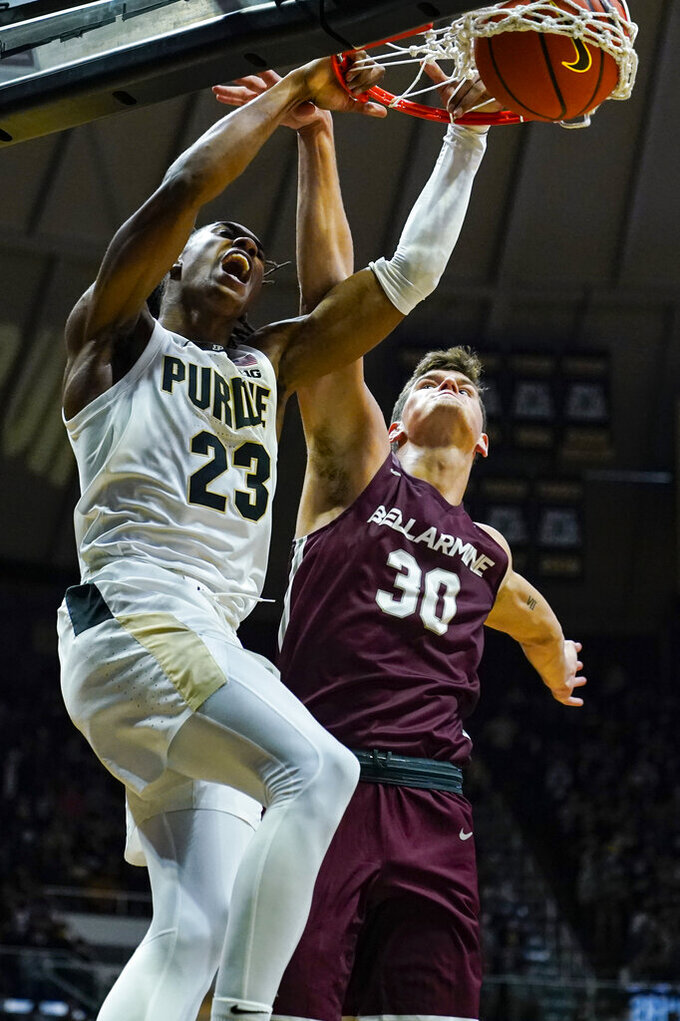 Purdue guard Jaden Ivey (23) goes up for a dunk next to Bellarmine forward Nick Thelen (30) during the second half of an NCAA college basketball game in West Lafayette, Ind., Tuesday, Nov. 9, 2021. Purdue won 96-67. (AP Photo/Michael Conroy)

WEST LAFAYETTE, Ind. (AP) — Purdue's Sasha Stefanovic got in a groove from the outside. That's because of what his teammates were doing inside.

Stefanovic made 5 of 6 3-pointers and finished with 23 points to lead No. 7 Purdue past Bellarmine 96-67 on Tuesday night.

“We have a lot of credit across the board,” Stefanovic said. “If they are focusing in on Zach (Edey) and Trevion (Williams) in the post, we have to be able to knock down shots and execute our game plan. Our bigs are really good passing out of the post."

C.J. Fleming and Dylan Penn each scored 14 points for Bellarmine.

Thompson scored 12 of his 15 in the first half, and 3s accounted for all his points.

“Guys were just finding me for me for open 3s,” Thompson said. “It was just being ready to shoot when you know teams are going to over-help, get it (in) a good rhythm and knock it down. You want to take open shots, that's what coach (Matt) Painter preaches. He doesn't like when we take bad shots. But when you are open, he wants every shooter to shoot the ball."

Thompson said he has improved with more experience.

“I've been through two years of college basketball and a lot of ups and downs personally and as a team,” he said. “I'm just more confident. I think it just comes with time and experience.”

“A lot of our 3-pointers were rotation and moving the ball and their guys overplaying in the post” Painter said. “It was hard for us to simulate the way they play and the way they move the ball in practice. This was a great game for us to play because they are so different from everyone else. They have the same thing with our size. When you have someone like Trevion, who can pass the ball, it puts people in a bind."

Purdue: The Boilermakers have won nine straight season openers by an average of 28 points and are 16-1 in openers under Painter.

Bellarmine: The Knights are in their second season in Division I and aren't afraid to play the big boys. Last year they opened against Duke, and this season they'll play No. 1 Gonzaga and No. 2 UCLA on back-to-back nights next week.

Purdue held a 42-22 edge in rebounds, including 15 offensive rebounds. Freshman Caleb Furst and Edey each led the way with nine.

Purdue will be back to full strength after Mason Gillis serves two more games in his four-game suspension, which included the team's exhibition. Gillis, a sophomore forward who started 23 games last season, was arrested for operating a vehicle while intoxicated in June. … Purdue announced before the game it plans to redshirt freshmen Trey Kaufman-Renn and Brian Waddell. Painter said it was Kaufman-Renn's decision to redshirt with Purdue's depth in the post.

The Boilermakers likely enhanced its No. 7 ranking with a dominant performance in the second half.