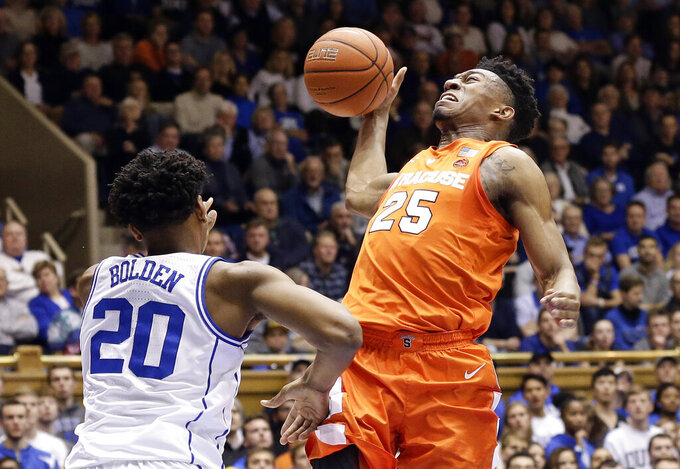 Duke's Marques Bolden (20) defends while Syracuse's Tyus Battle (25) drives to the basket during the first half of an NCAA college basketball game in Durham, N.C., Monday, Jan. 14, 2019. (AP Photo/Gerry Broome)

That was then. Things are different now for the Orange (14-5), who were ranked No. 16 in preseason. After seven wins in eight games, including five of six in the Atlantic Coast Conference, they sit in a five-way tie atop the conference standings. One of those victories was in overtime 11 days ago on the road against then-No. 1 Duke, a big confidence boost that has the team playing at a different level.

"We're just playing with energy," leading scorer Tyus Battle said. "If we have a shot, we're taking it."

And converting. In the past three games — wins over the Blue Devils , Pittsburgh and Miami — it hasn't mattered where the Orange shot from. They've hit 86 of 187 from the floor (46 percent), including 37 of 81 (45.6 percent) from beyond the arc. The latter figure exactly matches the season-long performance of the best long-range shooting Division I team in the nation — Lehigh — and mirrors the Orange's performance in one of their best wins of the season, 72-62 at then-No. 16 Ohio State in late November.

In each of those games, five Syracuse players hit 3-pointers. Buddy Boeheim, a sharp-shooting freshman guard who struggled early in the season, has suddenly found his range and is 8 of 12 on 3-pointers during the current three-game winning streak, while Elijah Hughes has hit 12 of 23 from 3. In its five losses, Syracuse shot 25.2 percent (32 of 127) from long range.

"We're taking that next step from being a good team and trying to be a great team," senior guard Frank Howard said.

The surge from beyond the arc is a good omen as the Orange prepare for a three-game road trip in a seven-day span starting Saturday at No. 10 Virginia Tech (15-3, 4-2).

"Right where we expected to be," said Boeheim, youngest son of head coach Jim Boeheim. "We're going to keep building off this and not back down for a second, keep working hard and not let ourselves get too over our heads."

Don't expect the head coach to get giddy. Syracuse still ranks 13th in the ACC in field goal percentage (42.8) and ninth from 3 (32.4). The memory of losses at Madison Square Garden to Connecticut and Oregon on consecutive nights in mid-November hasn't faded. The Orange were a woeful 11 of 50 from beyond the arc in those two games.

"Same shots we had against Oregon, exactly the same," Jim Boeheim said Thursday night after the Orange hit a season-high 14 3-pointers against the Hurricanes, one off the program record. "You've got to make them."

Hughes leads the team with 52 3-pointers, followed by Battle and Oshae Brissett with 22 apiece, Howard with 21, and Buddy Boeheim with 19. Sophomore forward Marek Dolezaj, a deft passer but still a reluctant shooter, has hit nearly half of his 3s but has only attempted 15.

Crisp ball movement and unselfish play allowed Syracuse to pull away from Miami in the second half Thursday night. The Orange notched a season-high 22 assists on 26 baskets and had just six turnovers while holding the Hurricanes to 20-of-59 shooting (33.9percent) in a 73-53 victory.

Defense has been a factor, too, behind some inspired play from 7-foot-2 center Paschal Chukwu, a force in the middle when he's focused. After Boeheim elected to not play Chukwu in a home loss to Georgia Tech, two days later the slender senior had a career-high 18 rebounds and 10 points against Duke and has contributed 10 of the Orange's 26 blocks during the current winning streak.

"It's just believing in ourselves," said Hughes, who had 22 points, three blocks, three assists, zero turnovers and three steals against the Hurricanes. "One guy is going to have a bad game, but we really have to pick each other up.