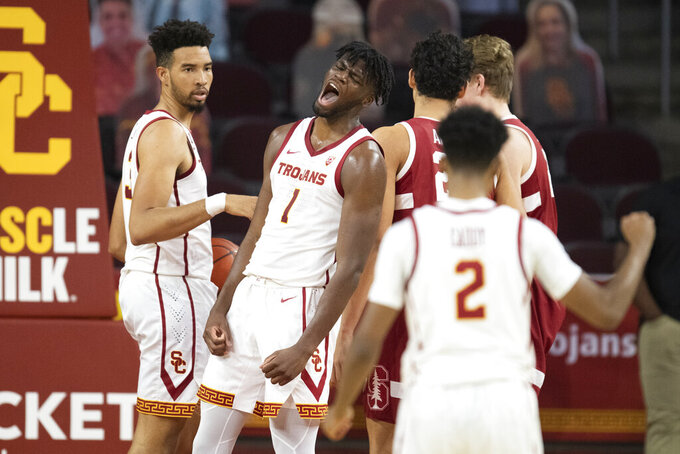 Southern California forward Chevez Goodwin, center, reacts after scoring a basket and drawing a foul during the first half of the team's NCAA college basketball game against Stanford on Wednesday, March 3, 2021 in Los Angeles. (AP Photo/Kyusung Gong) 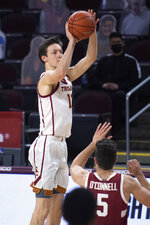 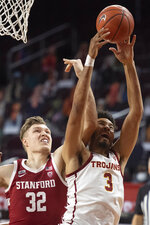 LOS ANGELES (AP) — Four games in a week and two losses on a mountain trip left Southern California mentally exhausted and done in physically by the high altitude.

Tahj Eaddy scored 16 points on 6-of-8 shooting and USC routed Stanford 79-42 on Wednesday night, snapping a two-game skid and keeping the Trojans in the hunt for the Pac-12 title.

“When he shot the ball it went in,” coach Andy Enfield said of Eaddy. “The last few games when he shot it, it didn’t go in. He played with confidence and he showed his leadership.”

Drew Peterson had 15 points, nine rebounds and six assists for the Trojans (20-6, 14-5 Pac-12), who notched their 20th win for the fifth time in six seasons under Enfield. They trail first-place Oregon by percentage points with one game remaining for each team.

Stanford (14-12, 10-10) was dealt its biggest loss of the season and has dropped a season-worst four in a row. The Cardinal sorely missed Oscar da Silva, the Pac-12's second-leading scorer who sat out his third consecutive game with a lower extremity injury. They were led by Spencer Jones and reserve Brandon Angel with nine points each.

“It's pretty simple. We were manhandled early and often. Defensively, we couldn't get stops," Cardinal coach Jerod Haase said. “This was a game that was really humbling. We were a shell of ourselves.”

The Trojans got the blowout going from the opening tip. They began with a 17-2 run that included 15 straight points as Stanford went 9:20 without a basket. Evan Mobley dunked twice and Peterson put down a one-handed jam for the Trojans, who quickly stretched their lead to 25-6.

“March is here,” said USC's Chevez Goodwin, who had eight points and five rebounds. “This is the time of year where it's make or break, lose or you go home. I feel like we're back on the right track now.”

Mobley finished with 10 points and eight rebounds in what was likely the standout freshman's final home game. He's expected to leave early for the NBA draft.

The Cardinal had just six points in the game's first 16 minutes. They shot 6 of 27 from the field and missed 6 of 9 from 3-point range while committing 11 turnovers in the half.

Eaddy's 3-pointer gave USC a 22-point lead, its largest of the half just before the break.

USC's offense was just as lethal to start the second half. The Trojans sank four consecutive 3-pointers — two each by Peterson and Eaddy — and Peterson added a basket to complete a 14-0 run that extended their lead to 50-19.

The Trojans cleared their bench with about five minutes to go. The reserves did the starters proud, pushing the lead to 38 points on a dunk by freshman Boubacar Coulibaly that had the bench on its feet cheering. Amar Ross' 3-pointer put USC ahead by 41 seconds later.

Stanford: With four straight losses to close the regular season, the Cardinal has likely played their way out of an at-large berth in the NCAA Tournament. Haase said he hopes to have a full roster, including da Silva, back for the Pac-12 tourney. “Oscar provides a lot to the team,” Haase said. “He also has a steadying impact on the game, gives guys confidence.”

USC: The Trojans righted themselves in a big way after losing back-to-back games for the first time this season. They'll need help to claim the Pac-12 title. They have to beat UCLA this weekend and have Oregon lose to Oregon State to clinch the title by one game over the Ducks.

The teams finally played at Galen Center after the game was scheduled four times. They were set to play in LA on Dec. 13, but got postponed because of COVID-19 issues with the Trojans. The game was rescheduled for Feb. 2, but it was switched to a road game at Stanford and the home date for USC was pushed back to Feb. 22. Instead, USC ended up hosting Oregon on that date.