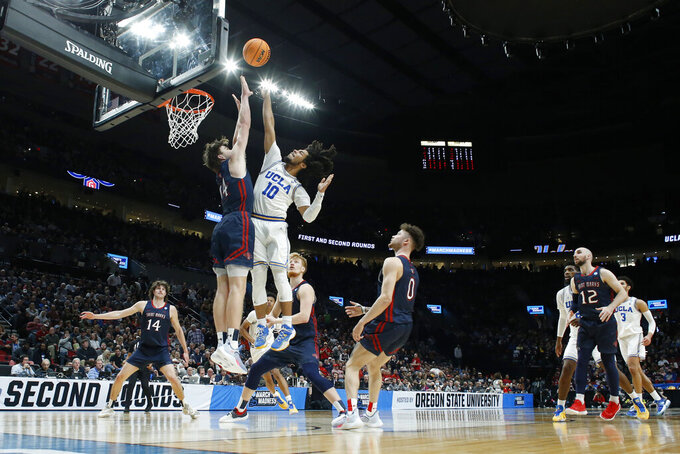 FILE - UCLA guard Tyger Campbell (10) puts up a shot during the second half of a second-round NCAA college basketball tournament game against Saint Mary's College on March 19, 2022, in Portland, Ore. Campbell and Jaime Jaquez Jr. are back for their fourth seasons, a couple of battle-tested veterans who arrived at the same time as coach Mick Cronin to rebuild a program that owns a record 11 national championships. UCLA opens the season at home with two new five-star recruits against Sacramento State on Nov. 7. (AP Photo/Craig Mitchelldyer, File)

LOS ANGELES (AP) — A pair of five-star recruits are sure to turn heads at UCLA this season. In an era when freshmen burn brightest, however, it’s two seniors who could prove invaluable to the eighth-ranked Bruins’ NCAA title hopes.

Jaime Jaquez Jr. and Tyger Campbell are back for their fourth seasons in Westwood, a couple of battle-tested veterans who arrived at the same time as coach Mick Cronin to rebuild a program that owns a record 11 national championships.

The COVID-19 pandemic canceled the NCAA Tournament in 2020, when the Bruins were riding a hot streak in March. Jaquez and Campbell helped them to a Final Four appearance in 2021. UCLA lost to North Carolina by seven points in the regional semifinals last season.

UCLA opens the season at home against Sacramento State on Nov. 7. The Bruins play five of their first seven games at Pauley Pavilion in the first month of the season. They travel to Las Vegas for two games before playing their first Pac-12 game at Stanford on Dec. 1.

The Bruins' nonconference schedule includes games at Maryland on Dec. 14 and against Kentucky at New York's Madison Square Garden on Dec. 17.

Jaquez and Campbell anchor one of the best backcourts in the nation despite the losses of Johnny Juzang and Jules Bernard. Jaquez is back to full strength after late-season ankle injuries slowed him. Campbell finished in the top four in the Pac-12 in assists in each of his first three seasons and his 3-point shooting ticked up to 41% as a junior. Fifth-year senior David Singleton is also a threat from deep, shooting 45% last season. Jaylen Clark showed what he can do as a starter, averaging 14.8 points during a five-game stretch in the lineup. They're joined by Bailey, the Bruins' highest-rated prospect since Lonzo Ball in 2016. Will McClendon finally makes his Westwood debut after a torn ACL kept him out of action last season.

The departures of Cody Riley and Myles Johnson leave the Bruins with an unproven frontcourt. As a result, Bona from Nigeria figures to join the starting rotation. He was a McDonald's All-American at his prep school in Napa, California, and has international playing experience. Mac Etienne returns after missing all last season with an ACL injury, having shown promise late in the 2020-21 season. Senior Kenneth Nwuba gives the Bruins a third player at 6-foot-10.

OTHER FRESHMEN TO WATCH

The Bruins added guard-forward Abramo Canka of Italy, who has played in the Russian Super League. Guard Dylan Andrews grew up in Los Angeles and was ranked among the top 10 by some recruiting services. Preferred walk-on Evan Manjikian is another LA native who played at Sierra Canyon High, alongside current Bruins teammate Bailey and Bronny James, son of Lakers star LeBron James. Jack Seidler, also a preferred walk-on, was a two-time all-conference selection at Marlboro (New Jersey) High, where he finished as the career scoring leader.

Beer and wine will be for sale to the public for the first time at Pauley Pavilion this season. Fans who are 21 and over can purchase two drinks per transaction until the 10-minute mark of the second half. Since the arena's renovation 10 years ago, alcohol had been available only to members of the Wooden Athletic Fund in a private room.