Vols' Fulkerson to miss rest of SEC tourney with concussion 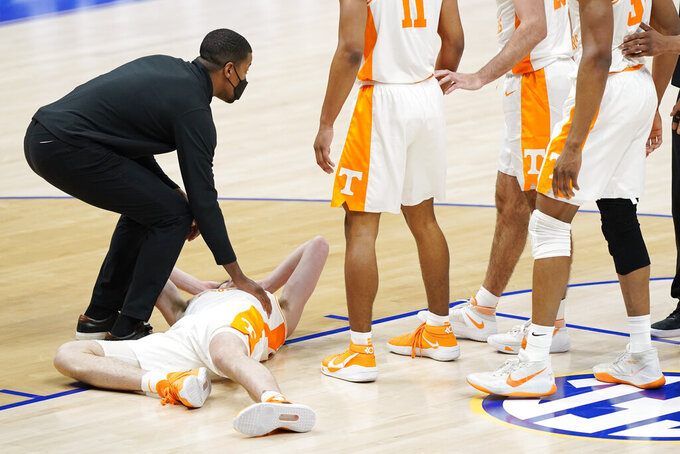 Tennessee's John Fulkerson is attended to after being fouled by Florida's Omar Payne in the second half of an NCAA college basketball game in the Southeastern Conference Tournament Friday, March 12, 2021, in Nashville, Tenn. Payne was ejected from the game. (AP Photo/Mark Humphrey)

NASHVILLE, Tenn. (AP) — Tennessee forward John Fulkerson sustained a concussion and facial fracture during a quarterfinal win over Florida and will miss the rest of the Southeastern Conference Tournament.

The school announced the update Saturday before the Volunteers played No. 6 Alabama in the semifinals.

Fulkerson, a senior, was hurt with 17:10 left Friday and had to be helped to the locker room after taking two elbows to his head from Florida’s Omar Payne. Replays showed Payne caught Fulkerson with a left, forearm shiver to the face, then put his right elbow into Fulkerson’s head.

Officials ejected Payne after the review.

Fulkerson was taken to a hospital, and Tennessee shared a video of Fulkerson Friday night thanking fans, with bruising obvious below his right eye.