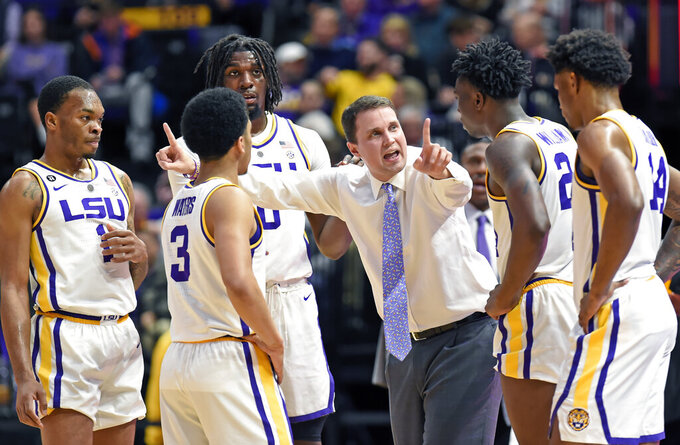 LSU head coach Will Wade has a word with his players, from left, Ja'vonte Smart (1), Tremont Waters (3), Naz Reid (0), Emmitt Williams (24) and Marlon Taylor (14) during a break in the first half of an NCAA college basketball game against Georgia, Wednesday, Jan. 23, 2019, in Baton Rouge, La. (AP Photo/Bill Feig) 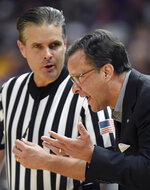 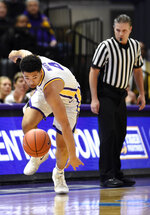 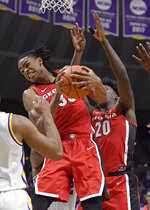 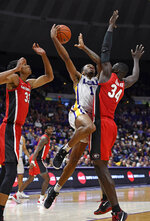 BATON ROUGE, La. (AP) — A little more than a month ago, LSU point guard Tremont Waters went to the bench for two games.

Since returning to the starting lineup in the Tigers' final non-conference game, Waters has been a different player. He delivered his best game of the season Wednesday night as No. 25 LSU beat Georgia 92-82 to remain unbeaten in Southeastern Conference play.

Waters scored a season-high 26 points, making nine of his 14 field goal attempts and seven of 11 free throws. In addition, he had four assists and four steals with no turnovers in 32 minutes to help the Tigers win their eighth straight overall.

"I was just playing basketball," Waters said. "My teammates and coaching staff told me to just keep playing and let the game come to me. That is what I did. It was not our best game. Going into the game, things were a little shaky. We were able to pull it out. We have to just keep building and learn from it."

Waters, averaging 17.5 points and 7.8 assists over the last six games, had a hand in 13 straight points by the Tigers late. He scored 10 points and had an assist that led to a three-point play by Kavell Bigby-Williams as LSU extended a seven-point lead to 12 with 45 seconds to play.

Skylar Mays matched his season best for the Tigers (15-3, 5-0 Southeastern Conference) with 20 points. Naz Reid had 15 and Ja'vonte Smart added 10.

"Tre was great and Sky was great in the first half," LSU coach Will Wade said. "They bailed us out with their offense. We were able to score at will against their matchup (zone) and their man. We scored 92 points and only turned it over eight times. Our defense looked like it did at the beginning of the year."

"LSU is really good," Georgia coach Tom Crean said. "They are extremely talented and (Wade) has done a fantastic job of getting a bunch of young guys to understand what it takes to win, and that is to be so good on the glass. Also, when you play LSU, it starts with Tremont and his ability to pass."

A 14-0 run early in the first half enabled LSU to take control. Trailing 13-8, the Tigers got two baskets, one a 3-pointer, from Waters to tie the score. Smart's 3-pointer put LSU in front for good at 16-13.

Marlon Taylor made two foul shots and Smart knocked down a short jumper. A dunk by Taylor gave the Tigers a 22-13 lead with 12:07 left before halftime. Georgia got no closer than five the rest of the half. Mays scored 12 points in the last eight minutes as LSU took a 48-36 lead into halftime.

The Bulldogs cut their deficit to 50-44 less than two minutes into the second half. Waters and Reid made baskets to give the Tigers a double-digit lead. Georgia trailed by at least eight the remainder of the game.

Georgia had no answer for LSU's starting backcourt of Waters and Mays, who shot a combined 14 of 23 from the field with six assists and no turnovers. Mays was 8 of 8 at the foul line.

In all three of its SEC losses on the road, Georgia has allowed at least 90 points. Tennessee defeated the Bulldogs 96-50 and Auburn handed them a 93-78 defeat. LSU made 50 percent of its field goal attempts (33 of 66). The Vols shot slightly higher than 50 percent from the field and Auburn made exactly 50 percent. Georgia allowed LSU to score 44 points in the paint and 21 at the foul line.

Georgia: The Bulldogs dropped their fourth consecutive game. All five of Georgia's SEC defeats have been by double digits.

LSU: The Tigers begin a two-game road swing at Missouri on Saturday.

Georgia: The Bulldogs host Texas in the SEC/Big 12 Challenge on Saturday.