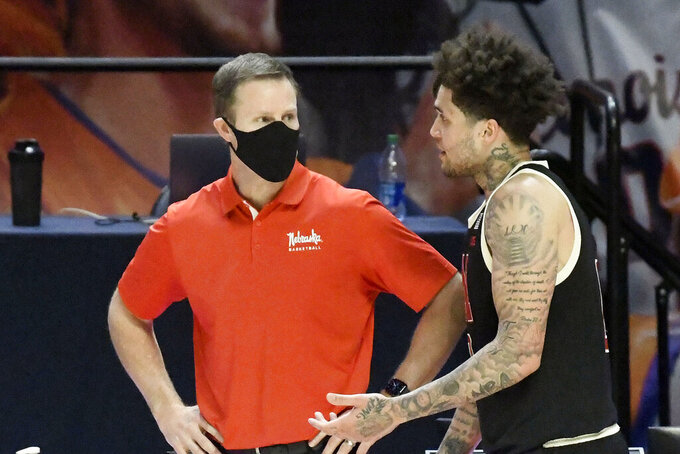 FILE - Nebraska coach Fred Hoiberg talks with guard Teddy Allen on the sideline during the first half of the team's NCAA college basketball game against Illinois in Champaign, Ill., in this Thursday, Feb. 25, 2021, file photo. Allen, who set the Pinnacle Bank Arena scoring record less than a week ago, left the Nebraska basketball team on Monday, March 1, 2021. Coach Fred Hoiberg and Allen released a joint statement announcing the departure and did not give a specific reason. (AP Photo/Holly Hart, File) 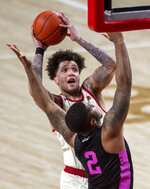 Nebraska was Allen’s third Division I program in a mercurial career on and off the court. Coach Fred Hoiberg mentioned last week that Allen had been bothered by a wrist issue.

“After a lot of thought over the last few days, I have made the decision to focus on getting fully healthy in preparation for the next step in my basketball journey," Allen said. "I will continue to stay at Nebraska for the spring semester and work toward graduation. I am looking forward to what the future holds, as I explore my options.”

Allen began his career at West Virginia and was there for one season, transferring to Wichita State in 2018. He sat out the next season per transfer rules and never played a game for the Shockers. He was kicked off the team in June 2019 after he was arrested in connection with a disturbance with his girlfriend.

Allen moved on to Western Nebraska Community College, where he was the national junior college scoring leader in 2019-20, and then joined Hoiberg's team in Lincoln.

Allen averaged 16.5 points per game to lead the Huskers, and he scored an arena-record 41 in a 86-83 loss to Penn State last Tuesday. He was limited to seven points in 20 minutes in a loss at Illinois two nights later, prompting Hoiberg to mention the wrist issue for the first time.

Allen was not in the starting lineup for the home game against Minnesota on Saturday and was held scoreless, playing 10 minutes in the 78-74 win.

Allen was a star high school player at Boys Town, the Omaha-area home for troubled youth, and his arrival at Nebraska was much celebrated by a fan base hopeful he could play a major role in Hoiberg's effort to build the program.

“I would like to thank Coach Hoiberg and his coaching staff for allowing me to come back to Nebraska and have the opportunity to play basketball in the best conference in the country” Allen said. "I appreciate the support I’ve received from everyone in the program. I am thankful for the love I have received from my teammates and the relationships we have built over the last year."

Allen played in 22 games for the Huskers and had 20 or more points eight times. He was suspended for the Feb. 8 game at Minnesota for violating team rules.

“I enjoyed the opportunity to coach Teddy over the past year,” Hoiberg said. “We will support him as he finishes the spring semester and wish him nothing but the best going forward.”