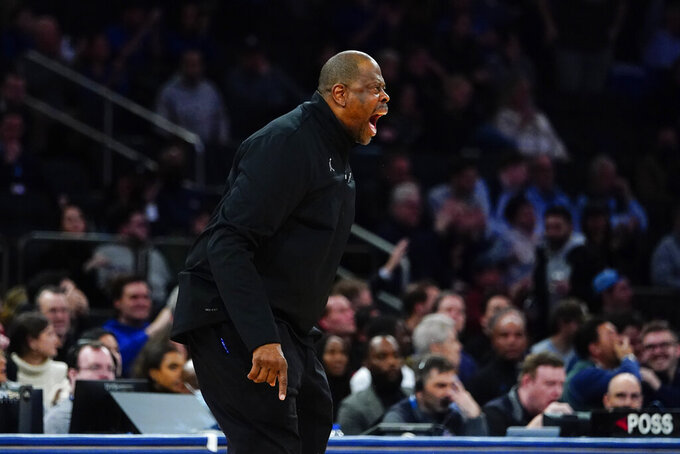 Georgetown coach Patrick Ewing calls out to the team after a shot clock violation during the first half of an NCAA college basketball game against Seton Hall at the Big East men's tournament Wednesday, March 9, 2022, in New York. Seton Hall won 57-53. (AP Photo/Frank Franklin II)

WASHINGTON (AP) — Three Georgetown men’s basketball players entered the NCAA transfer portal on Wednesday, the latest in a series of members of coach Patrick Ewing's team to leave the Hoyas.

The school announced the departures of Timothy Ighoefe, Tyler Beard and Jalin Billingsley.

Ighoefe is a 7-foot junior center who averaged 2.6 points and 4.1 rebounds across 60 games at Georgetown, including 21 starts.

Beard is a 6-2 freshman guard who made two starts in 30 total appearances, averaging three points, 1.3 assists and 1.4 rebounds.

Billingsley is a 6-8 freshman forward who put up 2.1 points and 1.8 rebounds per game while appearing in 30.

Georgetown ended the season on a school-record 21-game losing streak, finishing 6-25 overall and going 0-19 in Big East regular-season play plus a first-round loss in the conference tournament. That is the worst record in league history.

The trio entering the portal joins a string of Ewing's players who have transferred to other schools, including Mac McClung, James Akinjo and Qudus Wahab.

In 2019, three players left the team after being accused of harassment by Georgetown students.

Ewing, who has led the Hoyas to just one season above .500 during his five in the job, received a public show of support from athletic director Lee Reed on March 2.

After acknowledging the “disappointment of a difficult season,” Reed went on to say in his statement: “In this ever evolving landscape of college athletics we are committed to Coach Ewing, and we are working with him to evaluate every aspect of the men’s basketball program and to make the necessary changes for him to put us back on the path to success for next year.”