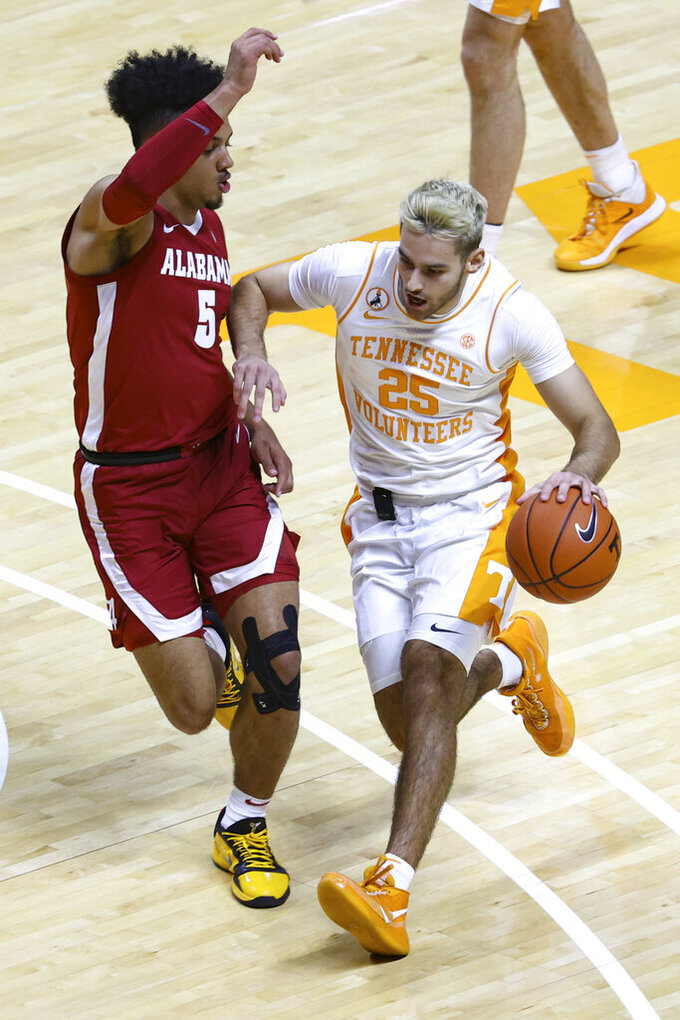 KNOXVILLE, Tenn. (AP) — It took Nate Oats a season and 10 games to finally get a big one.

The second-year Alabama coach devised a solid game plan and got his players to execute it to finally claim a Top 10 victory Saturday night. In fact, it was the program's first true road win over a team ranked in the Top 10 since 2004.

John Petty hit three critical 3-pointers and finished with 19 points, leading Alabama to a stunning 71-63 victory over No. 7 Tennessee.

“Attitudes are all great right now,” Oats said. "I really like where we're at. Petty's all about the right stuff."

The Crimson Tide (7-3, 2-0 Southeastern Conference) turned a two-point halftime lead into a double-digit advantage midway through the second behind Petty’s trio of 3s and two more long-range makes by Joshua Primo.

“This was good for us,” Tennessee coach Rick Barnes said. "Everything we had talked about the last two weeks happened tonight. We had to guard the 3-point line because they can really get it going.

“We didn't deserve to win tonight and they did.”

Victor Bailey Jr. scored 16 points and Santiago Vescovi had 13 for the Volunteers. Keon Johnson added 12 points. Yves Pons had five second-half blocks when Tennessee clawed its way back to single digits late in the game, but never got closer than six points.

“Alabama did what it wanted to do,” Barnes said. “Still, we had a chance if we would have executed in the last 3 minutes.”

“Defense the last 8 minutes was great,” Oats said. “We won the game on the defensive end.”

The first half was painful on both sides.

The Vols had three turnovers and two missed shots before they scored their first points, almost 3 minutes into the game.

With 8:46 left in the first half, the score was tied at 14 as both teams labored to make anything happen.

“We didn't shoot the ball well at all in the first half, still up two at the half,” Oats said. “(That) speaks to our defense.”

Primo and Petty combined to hit 7 of 9 3-pointers, most of which came in the stretch early in the second half. They were instrumental in a 17-4 run that gave 'Bama the breathing room it needed. As a team, the Crimson Tide hit 10 of 20 3-pointers.

It was the type of game that Tennessee couldn't handle.

The Vols didn't have any fastbreak points and had nine turnovers compared to seven assists, numbers far below what they're used to posting. Alabama outscored Tennessee, 18-16 in the paint.

“Sometimes you just have to throw out the scouting report and buck up,” Barnes said. “We have to make them shoot as difficult a shot as we can.”

Alabama: It's still early, but the SEC campaign is already starting to shake itself out. The Crimson Tide will rely on this game, as well as quality wins over Ole Miss, Providence and UNLV, to be prepared for the grind ahead.

Tennessee: Freshman guard Jaden Springer, who has made an impact early this season, missed most of the game with an apparent injury to his left knee. How he responds from the injury will have a lot to do with the Vols' chemistry down the road. Barnes did not elaborate on Springer's condition.

Alabama: The Crimson Tide will be home Tuesday to face Florida, which beat LSU on Saturday.

Tennessee: Last week, the Vols handed Missouri its first loss. Saturday, Mizzou knocked Arkansas from the ranks of the unbeaten. Wednesday, Tennessee will entertain the Razorbacks.