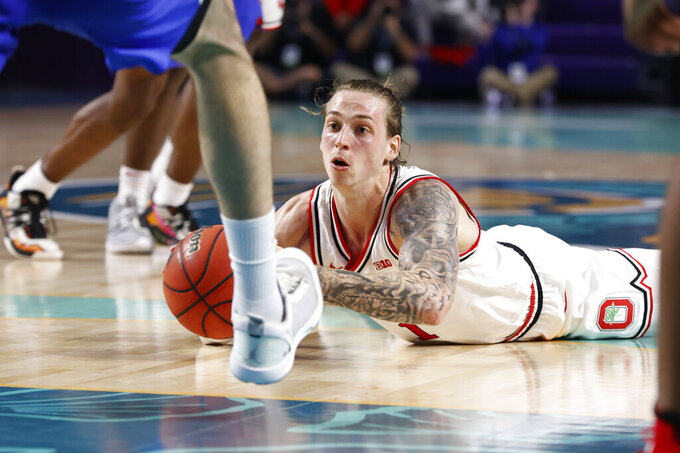 Ohio State guard Jimmy Sotos reaches for the ball during the second half of the team's NCAA college basketball game against Florida on Wednesday, Nov. 24, 2021, in Fort Myers, Fla. (AP Photo/Scott Audette) 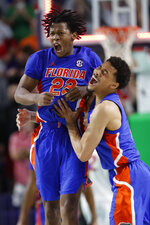 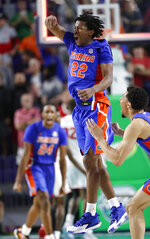 The entire Gators bench stormed on the court for a wild celebration after Appleby's shot went in. Players were dancing at midcourt awaiting the start of the trophy celebration.

“It was like a movie,” Appleby said. “Once I hit the shot, I felt my teammates right there with me. Probably one of the best moments of my college career, really my life.”

Appleby was 1 for 9 shooting before he connected as time expired.

“He's a gutsy guy,” Florida coach Mike White said. “He's got a high level of confidence. He's the type of guy that makes that type of shot.”

Florida (5-0) got 19 points from Phlandrous Fleming Jr. Colin Castleton had 11 points and 13 rebounds.

E.J. Liddell scored 23 points for Ohio State (4-2). Kyle Young picked up his fifth foul midway through the second half and finished with 11 points.

“It was a game we really had to be resilient and respond,” Ohio State coach Chris Holtmann said. “It was an ugly at times but extremely physical.”

Florida reached the title game after Castleton scored 16 points and Appleby added 15 in an 80-60 win over California Monday night.

Ohio State won its opener at the tourney when Meechie Johnson Jr. made a 3-pointer with 2.3 seconds left to beat No. 21 Seton Hall 79-76 on Monday night. Liddell had 28 points in that game.

On Wednesday night, Liddell connected on two free throws and Jamari Wheeler grabbed an offensive rebound that led to Zed Key making one of two free throws to put Ohio State up 68-66.

Anthony Duruji tied it at 68 with a dunk in the final minute, setting up Appleby's game-ender.

Liddell hit a 3 and then blocked a shot to set up Malaki Branham's layup as Ohio State took a 63-56 lead with 5 minutes left.

Ohio State grabbed its biggest lead, 47-37, with 13 minutes left when Jimmy Sotos drove into the paint for a loose ball and while on the ground made a pass to Key for a slam.

“Our guys showed a lot of grit,” White said. “A tough-nosed group that just found a way. It wasn't real pretty in a lot of areas for about 30 minutes. I thought the last 10 we executed at a better rate.”

After Florida scored the next five points, Key blocked Myreon Jones’ layup try, but the Gators got within 51-49 when Holtmann was called for a technical and Fleming made two technical and two regular free throws with 9 minutes remaining.

Holtmann said he was “obviously disappointed” about getting the technical. He also was called for one in Monday's game.

Florida: Could move up in next week's poll.

Ohio State: Even in defeat, the Buckeyes showed that they are close to being an AP Top 25 team even if they fall out of the rankings.

Florida had a significant edge at the free-throw line, making 23 of 33. Ohio State had 20 attempts and made 13.