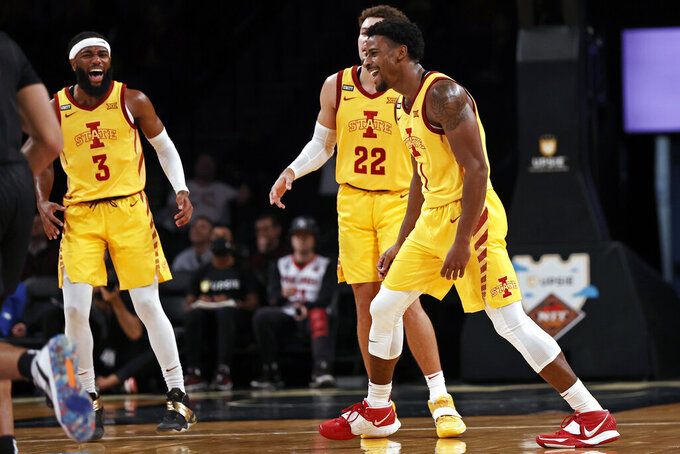 Iowa State's Izaiah Brockington reacts after making a 3-point basket against Xavier during the second half of an NCAA college basketball game in the NIT Season Tip-Off tournament Wednesday, Nov. 24, 2021, in New York. (AP Photo/Adam Hunger)

NEW YORK (AP) — Izaiah Brockington scored 23 of his 30 points in the second half, and Iowa State beat No. 25 Xavier 82-70 on Wednesday night in the NIT Season Tip-Off.

“The thing we like about our group is that we have some depth,” coach T.J. Otzelberger said. “We're playing nine guys every game and it's been different guys (who) have stepped up for us. ... What I'm learning is is on a given night, different guys can do the job.”

Iowa State trailed 39-38 at halftime but took control with a 24-9 run over the first 7:29 of the second half that included 13 points by Brockington. Xavier cut the deficit to five points, but didn't get closer as Iowa State closed out the game on a 16-9 run.

“We know basketball is a game of runs,” Hunter said. “How we came out (for the second half) is how we have to finish.”

The Musketeers pounded the ball inside, scoring 28 of their 39 first-half points in the paint, but were flustered by Iowa State's defense in the second half.

“We weren't ready,” Nunge said. “Credit to them. They were more physical in those stretches and we have to be ready to play.”

Iowa State: Big 12 Conference rivals likely won't look forward to the trip to Ames to face Iowa State's lockdown defense. Entering the game, the Cyclones had limited three of their first four opponents to 60 points or fewer, and they bottled up Xavier in the second half Wednesday.

Xavier: Eleven of the 16 players on the Musketeers' roster are seniors or juniors, and the experience showed as Xavier rallied from big deficits in each half. But Xavier has to make shots for its methodical approach to work, and the Musketeers went 9 of 25 from the field in the second half, including 1 of 9 from 3-point range.

“I thought our guys lost their minds a little bit in the second half,” coach Travis Steele said. “Missed a layup early. Missed a couple wide-open 3s. They went on their run and punched us in the mouth. And I thought that really affected our offense.”

The winner of Wednesday night's game between No. 9 Memphis and Virginia Tech faces Iowa State on Friday, while the loser meets Xavier.