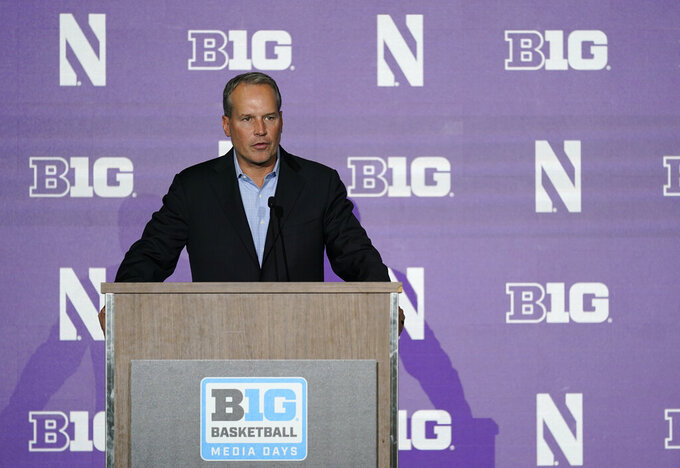 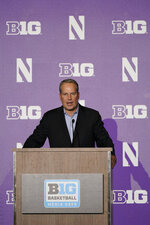 The Wildcats are counting on an experienced backcourt to help them end a string of losing seasons. And they're hoping their big men can fill the void after Pete Nance and Ryan Young left for North Carolina and Duke.

“We’re going to go as our perimeter goes,” Collins said. “I mean, that’s where the strength of our team lies.”

The Wildcats figure to lean on guards Boo Buie and Chase Audige and hope a few frontcourt players step up with Nance and Young gone. But the biggest question is where exactly Northwestern is headed.

The Wildcats have five straight losing seasons since the 2016-17 team banished the NCAA Tournament albatross. They were 15-16 overall and 7-13 in the Big Ten last season, ending in a 112-76 blowout by Iowa in which the Hawkeyes set Big Ten Tournament records for scoring, field goals and 3-pointers.

Athletic director Derrick Gragg, then in his first year, opted to bring back Collins with a mandate to make changes. And there might not be a coach sitting on a hotter seat, with the Wildcats set to open against Chicago State on Nov. 7.

The Wildcats looked like they were poised to become a consistent winner when they finally made the NCAA tourney — the first for the school that hosted the inaugural Final Four. They even won a game before losing a tight one to eventual runner-up Gonzaga.

Northwestern played the following season at Allstate Arena in suburban Rosemont while Welsh-Ryan Arena underwent a sparkling transformation, and the Wildcats haven't been the same since.

Buie, back for his fourth year at Northwestern, was second to Nance (14.6) in scoring last season at 14.1 points. They were the only Wildcats players in double figures. Buie also led the team in assists at 4.3 per game, making him the first Wildcat to average at least 14 points and 4 assists since McIntosh in 2016-17.

Audige averaged 9.8 points and led the team with 42 steals last season. But the Wildcats need him to be more accurate, after he shot about 34% overall and made just 27 of 108 3-pointers.

With Nance and Young gone, the only returning big man with much experience is 6-foot-9 forward Robbie Beran. He averaged 6.4 and 4.3 rebounds and shot about 37% on 3-pointers.

“We are going to have a younger front court," Collins said. "I’m anxious to see what those guys can do. A lot of new faces that are going to get opportunity. That’s kind of what college basketball is about really. There are a lot of teams in this league that have lost guys that have been mainstays. It’s opportunity for other guys to step up. Certainly we’re going to need those guys to do their part.”

Northwestern plays in the Cancun Challenge and also has nonconference games at Georgetown on Nov. 15, against Pittsburgh on Nov. 28 and against DePaul on Dec. 17. The first Big Ten game is at Michigan State on Dec. 4.