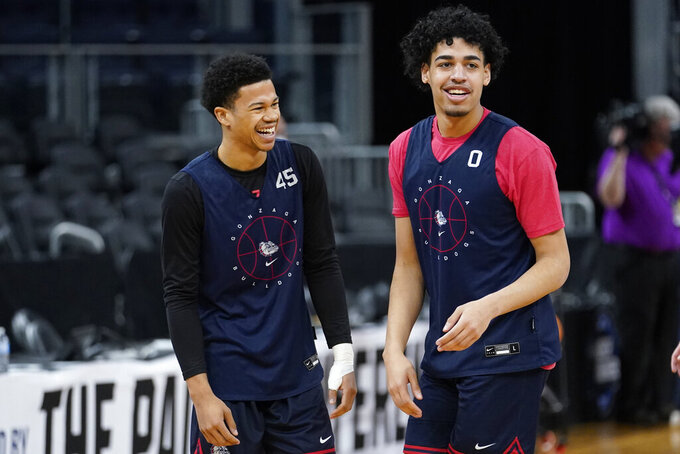 SAN FRANCISCO (AP) — When Texas Tech coach Mark Adams got his first head coaching job back in 1981, Mike Krzyzewski was getting ready for his second season at Duke.

While Krzyzewski was winning five NCAA titles, three Olympic gold medals and setting records for most wins by a men's coach in Division I, Adams was slogging his way through junior college, NAIA, Division II and low-level Division I with a brief hiatus running a minor league hockey team.

Now the coaches get a chance to square off in Adams' first season as a major college coach when his third-seeded Texas Tech team faces second-seeded Duke (30-6) in the West Region semifinal Thursday night in what could be Krzyzewski's final game before retirement.

"He has learned the game, like a lot of us have plane stops that we’ve gone, he has learned it with bus stops, the different levels that he has been at,” Krzyzewski said. “I respect the heck out of that. ... When you are at the bus stops, you don’t make a lot of money. You better love what you do. It’s obvious that that’s what he has done, and he has taken it to a really high level.”

Krzyzewski and Adams haven't crossed paths often over the years but Coach K did have Adams on his radio show earlier this season as Texas Tech (27-9) put together an impressive season in his first year as head coach.

Adams said he got a thank you card from Krzyzewski just a few days ago.

“I think he probably knew, he was scouting me out is what he was doing,” Adams joked. “It was a special moment for me."

Texas Tech has the more experienced team with several transfers on a roster that lacks the heralded recruits that the Blue Devils have. But they relish the opportunity to play spoiler and deny Krzyzewski the chance to end his coaching career as a champion.

“I know there’s a lot of press and media about this game, but we’re just not letting that get to us,” forward Marcus Santos-Silva said. “We know what’s the outcome if we come out with this win, and we would be lying if we didn’t know, yeah, if we win this, we send Coach K home.”

That's the burden a young Duke team has been carrying ever since Krzyzewski announced last spring that this would be his last season.

“We want to send him out the right way, and that’s been the motivation since the beginning was to send him out on top,” Banchero said. “I wouldn’t say it’s something we talk about before every game. That’s just a given.”

Griffin is set to play for the Blue Devils after missing the end of the second-round win over Michigan State with a sprained ankle.

He was able to practice Tuesday and had only a little soreness Wednesday. Griffin is Duke's top outside shooter with a team-high 66 made 3-pointers this season.

California and the West Coast have not been kind to Coach K in the NCAA Tournament.

The Blue Devils have lost all three tournament games they have played in the state and are 0-5 overall on the West Coast during Krzyzewski's career.

Duke lost in the Sweet 16 in Anaheim to Kansas in 2003, Arizona in 2011 and Oregon in 2016. Their only other games out West came in 1984 when the Blue Devils lost in the second round to Washington in Pullman, Washington, after getting a first-round bye and in the Final Four to Seton Hall in Seattle in 1989.

Gonzaga star forward Drew Timme won’t hear of it: Arkansas as an underdog.

“They are a really good freaking team,” Timme said. “They’re in the Sweet 16, and just to win a game in the NCAA Tournament is just hard enough as is.”

That’s why 23rd-year Zags coach Mark Few wants his players to cherish this opportunity even if Gonzaga has reached the Sweet 16 for a seventh straight time.

“We’re not just taking that for granted, and we definitely enjoyed every part of it and every aspect of it, and I think the guys have done a great job with that,” Few said.

On the practice floor at the Golden State Warriors’ sparkling Chase Center, Arkansas big man Jaylin Williams and guard J.D. Notae imagined themselves for a minute being Stephen Curry and letting it fly from midcourt.

It's a homecoming for coach Eric Musselman, who spent plenty of time in Northern California during his time as coach for the Warriors and the Sacramento Kings.

"First of all, I’m surprised my picture is not up on the wall anywhere in here,” he joked.