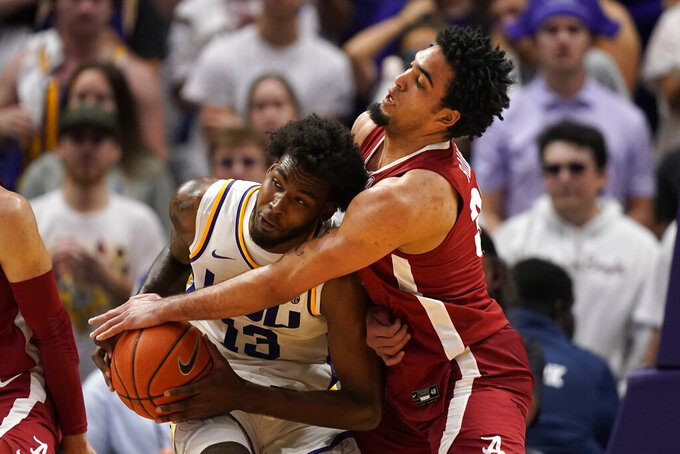 BATON ROUGE, La. (AP) — Tari Eason scored 20 points and had a key block that led to his go-ahead dunk with 38 seconds left in overtime, and LSU scored the final six points to beat No. 25 Alabama 80-77 on Saturday.

Darius Days had 24 points and Brandon Murray finished with 17 for LSU (21-10, 9-9 Southeastern Conference), which came in having lost three of four.

Keon Ellis scored 19 points for Alabama (19-12, 9-9) and Jahvon Quinerly added 16, including a 3-pointer in OT that gave the Crimson Tide a 75-74 lead. Ellis extended the advantage to three points on his layup with 1:31 remaining, but Alabama didn’t score again.

Eason made two free throws with 1:11 left. Then he blocked a field goal attempt by Ellis. Murray retrieved the loose ball and fed Eason, who slammed it home — and felt a sense of relief after his foul allowed Alabama to tie the score in the final seconds of regulation.

“I messed up,” Eason said. “I told the guys it was my mistake. I didn’t want to leave a bitter taste in my mouth. I did whatever I could to get it back for us in overtime.”

The Crimson Tide’s next possession ended with a shot-clock violation. Eric Gaines sank two free throws for the Tigers with 7 seconds left, and Quinerly missed a 3 at the buzzer for Alabama.

The Crimson Tide finished tied with LSU for fifth place in the SEC one year after winning the conference title.

“This was a tough loss,” coach Nate Oats said. “We played a lot harder than we had recently. LSU had 16 steals. Every little detail matters, especially in road games. Our turnovers are a major issue now.”

LSU took its first lead of the second half at 66-64 on a basket by Days with 3:21 remaining. After falling behind by four points, Alabama came back to tie the score at 70 when JD Davison made a free throw with 1:17 to play.

Days’ layup with 51 seconds remaining gave the Tigers a 72-70 lead. The Crimson Tide forced overtime when Eason fouled Ellis, who made both free throws with 12 seconds left.

Ellis carried Alabama for a three-minute stretch earlier in the half. He scored ten straight points, including two 3-pointers, as the Crimson Tide grabbed a 54-51 lead. But, Alabama never led by more than five points in the second half of a game that was tight all the way. Neither team had a double-digit lead at any point.

“Obviously, this was a great win,” LSU coach Will Wade said. “I can’t recall all of Darius’ games, but this was one of his best. I thought Tari bounced back after his mistake. You can either make an excuse or make it happen. He did a phenomenal job helping us win down the stretch.”

Alabama’s outside shooting was not there for the final 20 minutes of the game. Four 3-pointers — three by Ellis and one by Davison — helped the Crimson Tide go ahead 50-47 in the first six minutes of the second half. But Alabama made only one 3 for the rest of the game — by Quinerly in overtime. Quinerly was 4 of 11 on 3-pointers and Javon Shackelford was 0 for 8.

Days kept LSU in the game all afternoon after being honored alongside Xavier Pinson in pregame Senior Day ceremonies. Both players have another year of eligibility granted because of COVID-19. Days' 24 points were his most since the third game of the season. He was 8 of 15 shooting, including 3 of 7 on 3-pointers, and had seven rebounds and three steals.

LSU: The Tigers evened their SEC mark by finally winning a close game. LSU had dropped its last three conference games by a total of eight points.

Both teams will play their SEC Tournament openers in Tampa, Florida, on Thursday.