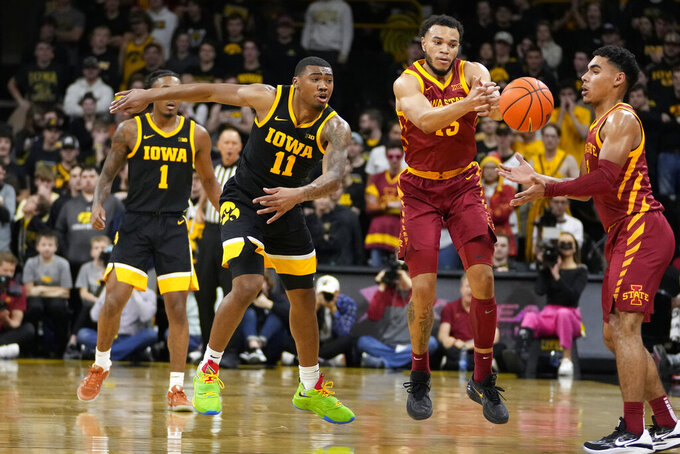 McCaffery, in his 27th season as a head coach and his 13th at Iowa, was hugged by sons Connor and Patrick, who started Thursday, as the final seconds ran off.

The locker room celebration was a lot more rowdy.

“Did you notice I don't have the same clothes on?” McCaffery said with a smile at his postgame news conference. “Every single piece of clothing was wet.”

McCaffery tried to downplay the milestone, but he did admit it was special being able to share the moment with his sons.

“I don't consider myself having 500 wins,” he said. “I've been blessed. I've worked with great people, I've coached great players, had great (assistant) coaches). You think about family. It's been an interesting journey, a difficult one at times.”

Iowa (7-2) scored the first 15 points and led by 29 in the second half, coming out with plenty of energy despite just one day of preparation for the game. The Hawkeyes, who lost to Duke on Tuesday night, arrived home at 5 a.m. on Wednesday.

“It was challenging,” Rebraca said. “We were tired. But who cares? Who cares if we were tired?"

The Hawkeyes were without leading scorer and rebounder Kris Murray, who missed the game with a left leg injury suffered in Tuesday's game. Murray averages 19.4 points and 10.1 rebounds and is a 50% shooter.

Rebraca was 9 of 11 from the field, while Patrick McCaffery had 13 points on 5-of-8 shooting, with all but three of his points came in the second half.

Rebraca, in his second year with the Hawkeyes after playing three seasons at North Dakota, had two 3-pointers in the game after making just one last season.

“I felt like he was the more physical guy,” Iowa State coach T.J. Otzelberger said. “He had great intent with how he played.”

“I felt like I went out there and made plays,” Rebraca said. “Coach needed me to step up, and I'm here to do it.”

Connor McCaffery, who started in Murray’s place, had 14 points. Tony Perkins had 10 points.

The Hawkeyes broke out of a 3-point shooting slump by hitting 12 of 23. They had shot just 24.4% from behind the arc in the last four games.

“They had great confidence early and it carried over,” Otzelberger said.

“I think every game that's your intention — to play defense with that kind of intensity,” Fran McCaffery said. “We set the tone defensively, and that helps get your offense going.”

“We wanted to come out and show who we are,” Rebraca said. “We were up in their space.”

Iowa State: The Cyclones, playing their first road game of the season, had plenty of momentum coming into this game off a 71-60 win over St. John’s on Sunday, but they were taken out of this game early and never recovered. With no shooting from the perimeter, it was hard for Iowa State to get any offense going until late in the game. “First time on the road for us, and it seemed like I got to us,” Otzelberger said.

Iowa: The Hawkeyes showed the balance of their offense in Murray’s absence. Rebraca, who recorded his third double-double of the season, has been a steady performer, and he was a contributor in multiple ways — he also had four assists. Fran McCaffery said after the game he doesn't expect Murray to play in Sunday's Big Ten opener against Wisconsin.