Florida gets defensive while rebuilding via transfer portal 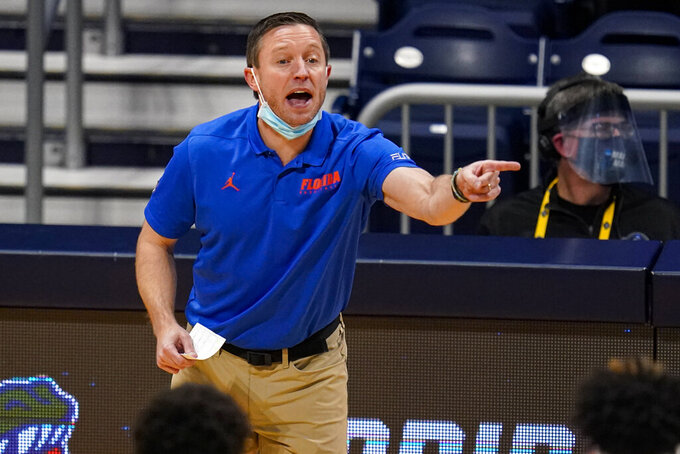 FILE - Florida head coach Mike White gestures in the first half of a first round game against Virginia Tech in the NCAA men's college basketball tournament at Hinkle Fieldhouse in Indianapolis, in this Friday, March 19, 2021, file photo. Florida might have its best defensive team in nearly a decade, an experienced group that seems to fit perfectly with coach Mike White’s style. (AP Photo/Michael Conroy, File) 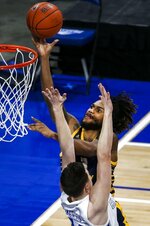 GAINESVILLE, Fla. (AP) — Florida might have its best defensive team in nearly a decade, an experienced group that seems to fit perfectly with coach Mike White’s style.

Throw in returning shot-blocker Colin Castleton and Boston College transfer CJ Felder, and the Gators could have their best collection of defenders since Scottie Wilbekin, Casey Prather, Will Yeguete and Patric Young ran roughshod through the league in 2014 and advanced to the Final Four.

“We have size, speed, mentality, which is one of the biggest things, and a chip on our shoulder,” Felder said. “We have guys with accolades, but we don’t care about the accolades. We just genuinely like playing defense and really give our best effort on that end of the floor.”

Florida’s Wilbekin-led foursome was years in the making, a testament to patience and development under then-coach Billy Donovan.

White didn’t have the same luxury. He turned to the burgeoning transfer portal to revamp a team that finished 15-10 last season and failed to get past the NCAA Tournament’s opening weekend for the third straight postseason.

Fleming led Charleston Southern in scoring (20.1), rebounding (7.4) and steals (33) last season. McKissic averaged 17.2 points for the University of Missouri-Kansas City while shooting 50.8% from the field and 42.9% from 3-point range. Myreon Jones led Penn State with 15.3 points a game.

But it’s the other end of the court that might see the biggest boost.

Although White filled most of his holes with transfers, he also brought in two freshmen. The class includes five-star recruit Kowacie Reeves, a 6-foot-6 guard who averaged 27 points and 9.9 rebounds as a senior at Westside High in Macon, Georgia. Guard Elijah Kennedy was a late addition to the class.

Forward Keyontae Johnson, who collapsed on the court and was rushed to a nearby hospital last December, is not expected to be medically cleared this season. Johnson will resume his role as “Coach Key,” helping run practices, motivate teammates and scout opponents. Johnson remains on scholarship.

“He’s very much a big part of what we’re doing,” White said.

The Gators open the season Nov. 9 against Elon, a tune-up before hosting No. 20 Florida State five days later. The Seminoles have won seven straight in the series.