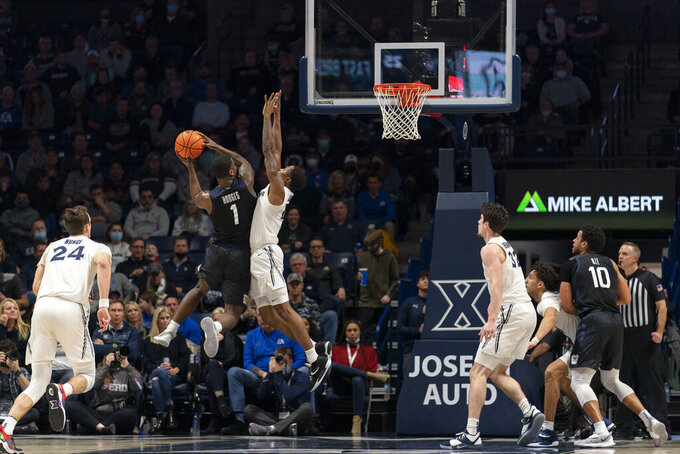 Chuck Harris and Jayden Taylor each scored 18 points for Butler (11-11, 4-7). The Bulldogs trimmed a 15-point deficit to four points twice in the last minute before Taylor hit a 3-pointer at the buzzer.

The Bulldogs fell to 0-9 against ranked opponents and hurt themselves with two second-half technical fouls. Nate Johnson made all four free throws.

“That was a heck of a Big East battle,” Butler coach LaVail Jordan said, “You've got to give a lot of credit to Xavier. The thing that makes them difficult is it can be anybody on any given night, and they've all had their good nights. That game was a battle to the end, which you expect in the Big East, especially in February.”

Xavier coach Travis Steele still is waiting for his team to put together a complete game.

“I hate it when you win and you feel like you didn't win,” Steele said. “I told the group in the locker room that every game is hard in this league, and you should celebrate every win, but we've got to put 40 minutes together. I thought we put together a pretty good 35 minutes.”

Xavier led 29-26 at halftime despite playing the last 15:27 without senior point guard Paul Scruggs after he picked up two quick fouls.

After Bryce Golden opened the second half with a leaner to pull Butler within one, Freemantle scored six points as the Musketeers took command with a 12-2 run for 41-30 lead.

Freemantle reached double figures for the third straight game as he continues to round into form after missing the first six games of the season while recovering from foot surgery.

“I don't feel different,” Freemantle said. “I could tell I'm starting to play at a high level while I'm getting more acclimated to the system.”

“Zach was good tonight,” Steele said. “He's been trending in the right direction the last three or four games. He's gaining confidence and become the player we've all seen.”

Butler freshman guard Simas Lukosius was named on Monday Big East Freshman of the Week after averaging 13.5 points and 4.0 rebounds and shooting 45 percent on 3-pointers in the Bulldogs’ wins over Creighton and Georgetown. The honor was his second of the month.

Butler: The Bulldogs suffered their first loss while outrebounding opponents after winning their first eight.

Xavier: Despite missing their first nine 3-point attempts and finishing 1 for 10 from long range, the Musketeers led at halftime for the first time in their last seven games.