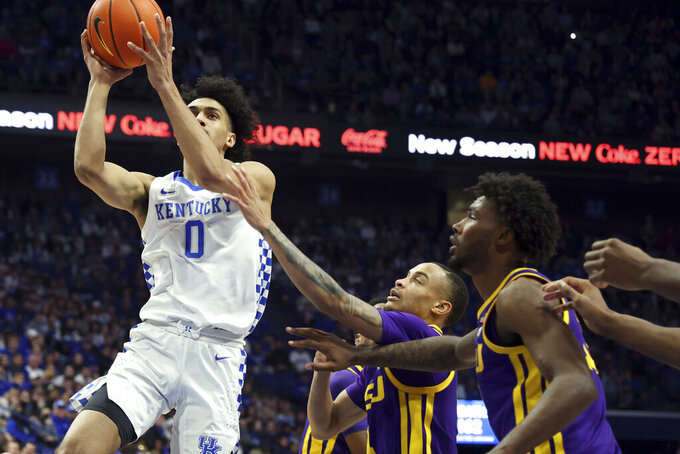 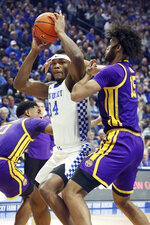 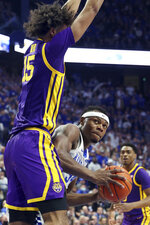 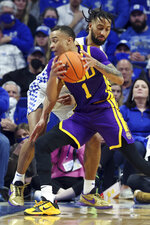 LEXINGTON, Ky. (AP) — Having seen his fellow Kentucky reserves shine when given the opportunity prepared Bryce Hopkins for his chance to make a difference.

Hopkins came off the bench to score a career-high 13 points, including 11 to fuel Kentucky's 15-2 second-half surge, and Oscar Tshiebwe and Keion Brooks Jr. made late free throws to help the No. 6 Wildcats survive LSU 71-66 on Wednesday night.

The short-handed Wildcats trailed 36-28 just after halftime and needed offense besides Tshiebwe. Hopkins, a 6-foot-6 freshman forward, provided an immediate spark by muscling for baskets and drawing chances at the foul line during the spurt. His three-point play put up Kentucky ahead up 39-36 with 15:35 left and came seconds after Tshiebwe grabbed Hopkins' missed free throw and created two chances ending with Hopkins' tip-in.

Hopkins was 5 of 6 from the field and had four rebounds in 16 minutes, just enough to give Kentucky a much-needed boost.

“I saw in the first half that we were kind of like playing a little slow," said Hopkins, who hadn't played more than four minutes since Jan. 15 and was averaging just a basket a game.

In the second half Coach (John Calipari) was saying we needed a little energy, so that’s what I tried to do when I came into the game. Just started to bring energy, and just contribute."

Calipari added, “All I have been talking about is preparing for an opportunity. ... You can listen to everybody tell you it is everybody else or the coach, or you can say when I get my chance, I am going to do what the team needs me to do.”

Xavier Pinson had a season-high 26 points for the Tigers (19-9, 7-8) in their second straight loss after three straight wins. Eric Gaines added 11 points and Days 10 with eight rebounds.

The Tigers played the final 9 1/2 minutes without standout reserve forward Tari Eason after he fouled out. Eason entered the game averaging 16.9 points and 7.1 rebounds per game and had scored at least 20 points the past four contests with seven double-doubles overall. Eason finished with just five points and a rebound in 13 minutes.

LSU: The Tigers shot 48% in the first half by making 5 of 12 3-pointers to build their lead, with Pinson setting the pace. But much like their 77-75 loss at South Carolina, they couldn't sustain a double-digit lead and made just 36% after halftime and 37% overall. They were also outrebounded 36-24 and edged 11-10 on the offensive glass.

Kentucky: Unlike the Alabama victory, where shots fell and others filled the void left by the absences of Washington and Wheeler, the Wildcats had to grind for points. Hopkins not only worked for the shots they needed, he provided a presence on the glass. The Wildcats again finished better than they started, outscoring the Tigers 48-35 after halftime and shooting 47%.

Kentucky: At No. 18 Arkansas on Saturday in the lone regular-season meeting between the teams.