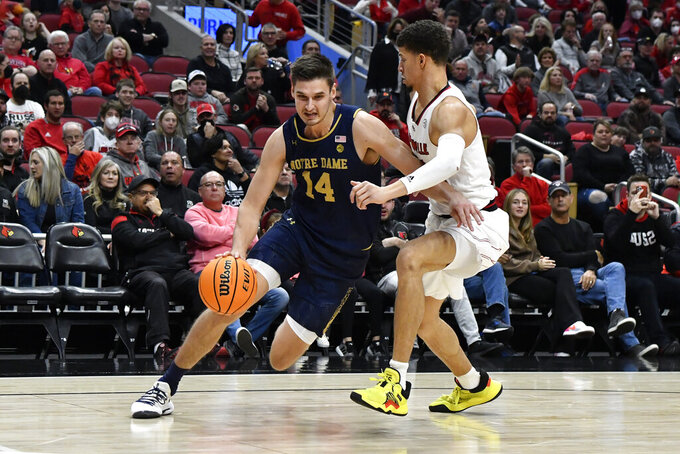 Wesley was one of four Notre Dame players with three 3-pointers and the Fighting Irish had a total of 15 on 23 attempts for 65%. They shot 67% overall against the Atlantic Coast Conference's top field-goal percentage defense (40.1).

Louisville's Jarrod West made all four of his 3-point attempts and scored 14 points but all came in the first half. Malik Williams added 11 points. The Cardinals shot 47% overall and 48% on 3-pointers (10 of 21).

Dre Davis returned to start for Louisville after missing the Cardinals’ previous game against Boston College with a right ankle injury. He scored seven points.

Trailing by three, Notre Dame's Cormac Ryan hit a 3-pointer to tie, Wesley followed with two more from the arc and the Fighting Irish were on their way to a 20-3 run and a 14-point lead with 4:20 remaining.

Atkinson scored the first five points of the second half in a 10-2 run as the Fighting Irish erased a seven-point halftime deficit and took a brief lead. That was the first of nine lead chances in the half before Notre Dame went on its pivotal run.

At halftime, Louisville retired Russ Smith's No. 2 jersey. He is the Cardinals' fifth-leading scorer with 1,908 points and steals leader with 257, playing from 2010-2014. He is the fifth Cardinal to have his number retired.

Louisville is at Virginia on Monday. Notre Dame is host to North Carolina State on Wednesday.