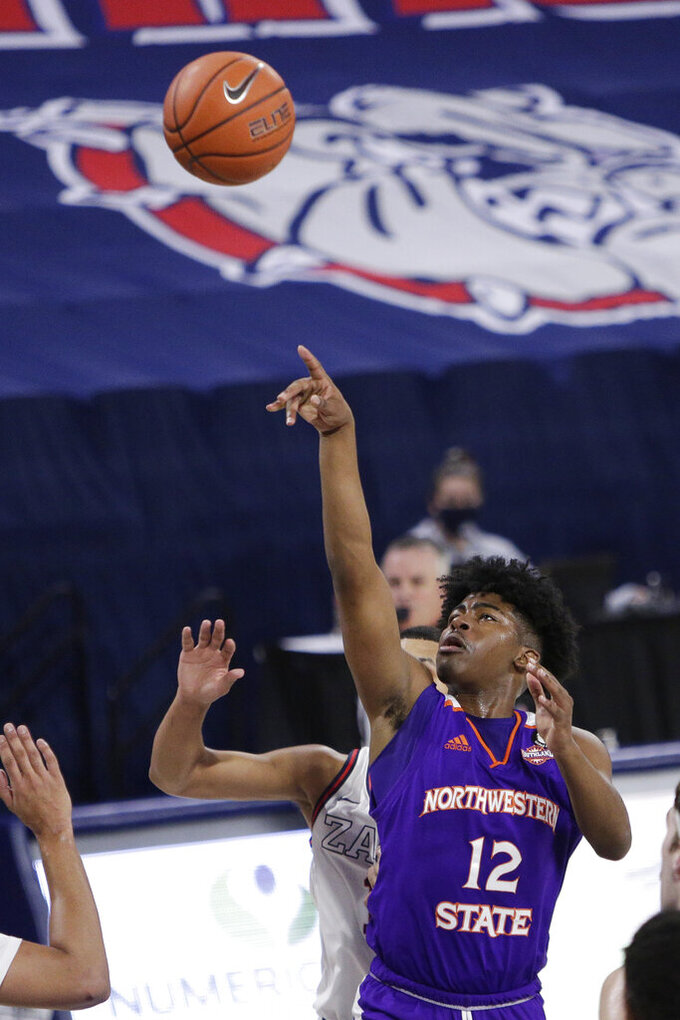 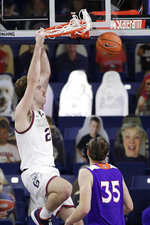 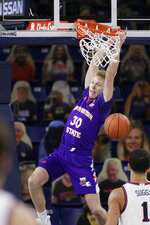 SPOKANE, Wash. (AP) — Corey Kispert of top-ranked Gonzaga was in the zone early in the game against Northwestern State of Louisiana, and his shooting kept the Bulldogs ahead.

"My first couple of shots went down and I was able to be dialed in the rest of the game,'' said Kispert, who scored 27 points as Gonzaga beat Northwestern State 95-57 on Monday night in the Bulldogs' home opener.

“Every thing slows down,'' Kispert said. ”Just being in the zone.''

Carvell Teasett scored 16 points and Jairus Roberson 12 for Northwestern State (1-8), which is picked to finish near the bottom of the Southland Conference.

Kispert made 10 of 13 shots and added seven rebounds in the first meeting between the teams.

The second meeting will occur on Tuesday night.

Gonzaga Coach Mark Few acknowledged that it is unusual for teams to play back-to-back games, "but we've never been in a pandemic, scheduling.''

"It's going to be a total mental challenge,'' Few said.

“There is nothing like game experience,'' Few said. ”You can't simulate that in practice.''

The unusual arrangement came about when Gonzaga had five games erased by the pandemic earlier this month.

"We were running out of options,'' Few said.

Gonzaga has won 32 consecutive regular-season home openers since losing to Boise State in 1988.

The Zags were coming off of a 99-88 win over then-No. 3 Iowa in Sioux Falls, South Dakota, on Saturday.

“Our Achilles’ heel was their offensive rebounds and putbacks,'' Demons coach Mike McConathy said. "They had 27 second-chance points and 50 points in the paint. It’s frustrating, but guys stepped up and continued to compete and continued to play.”

Kispert hit three 3-pointers in the first eight minutes as Gonzaga jumped to a 19-5 lead.

Gonzaga led 43-30 at halftime behind 15 points by Kispert. Northwestern State hung around despite shooting just 35% in the first. Teasett had 10 points for the Demons in the first.

Gonzaga built a 53-33 lead in the opening minutes of the second half behind six points by Kispert. The lead reached 30 points with eight minutes left in the game.

Despite the beating, Northwestern State is ready to go again on Tuesday, McConathy said.

“It’s a great opportunity to play against the No. 1 team in the nation, and we get to do it again tomorrow,'' he said. "We have to cut down on our turnovers and keep our guys up, keep encouraging them.”

With the win over Iowa, the Bulldogs became just the third team all-time to beat three AP top-15 opponents in their first four games of a season, joining 1974-75 Indiana and 1968-69 UCLA. They have also beaten Kansas and West Virginia this season.

This is the sixth time in their history that the Bulldogs have been ranked first, and they should remain there into the new year.

Northwestern State: The Demons played six of their first eight games away from their home in Natchitoches, Louisiana. Their only victory came on Dec. 12 at home over Champion Christian, 77-44.

Gonzaga: The Zags own the nation’s longest active home win streak at 40 straight. They are fourth in the nation in shooting at 54.3% from the field, and fourth averaging 94.5 points per game. Five players are scoring in double figures.

Northwestern State plays at Gonzaga in a rematch on Tuesday.

Gonzaga hosts Northwestern State in a rematch on Tuesday.