Lawson, South Carolina pull away for 84-80 win over UMass 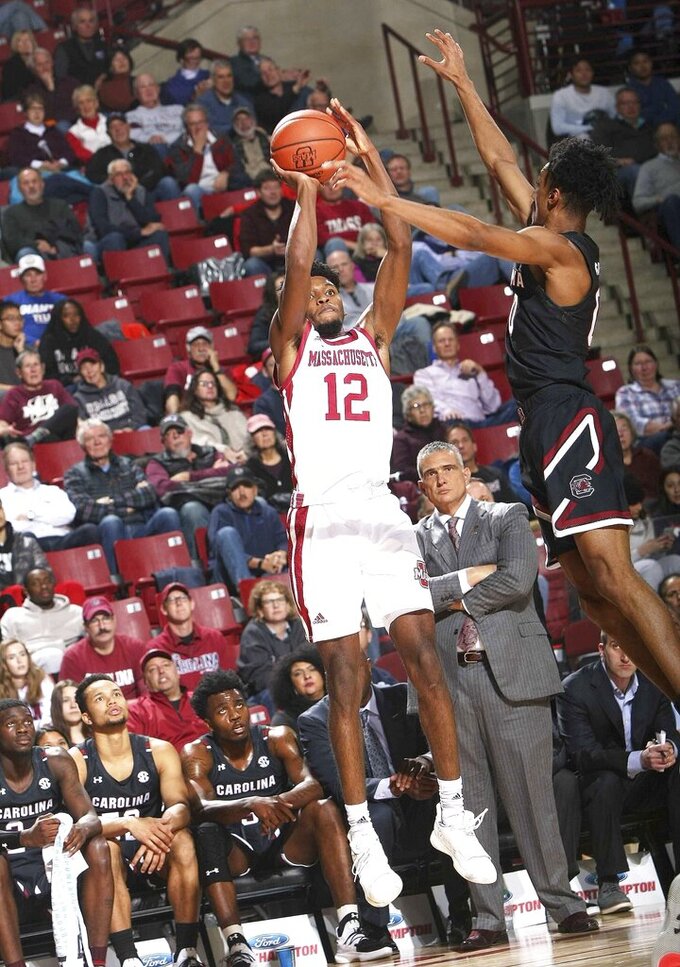 Carl Pierre, left, of Massachusetts launches up a 3-pointer from the corner over South Carolina's AJ Lawson during the first half of an NCAA college basketball game against Massachusetts Wednesday, Dec. 4, 2019, in Amherst, Mass. (J. Anthony Roberts/The Republican via AP) 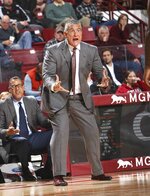 AMHERST, Mass. (AP) — A.J. Lawson knew how important it was for a young South Carolina team to start out on the right foot on the road.

The Gamecocks got the result they wanted in their first true road game of the season on Wednesday night, but they had to work for it.

“It was very important (to play well) because a lot of freshmen, redshirts, new guys that came in this year, it’s their first official road game — and we got the win,” the sophomore Lawson said. “It just brings confidence to our team.”

South Carolina (6-3) won five of its first six in Columbia, S.C., but lost both neutral site games in the Cancun Challenge in late November before returning home to beat George Washington 74-65 on Sunday.

“When you win on the road, you kind of hurry up, take a shower, hope the referees don’t come in the locker room and say there’s another 10 seconds to play, and get on the plane and go,” Gamecocks coach Frank Martin said.

UMass (5-4) lost its fourth in a row after opening the season with five straight wins. The Minutemen haven’t beaten a Southeastern Conference opponent since a 72-62 victory over Georgia on Dec. 16, 2017.

“Honestly, it’s just about staying positive,” Mitchell said. “I think there were a couple moments (tonight) where we got into timeouts and kind of went at each other’s throats a little bit instead of staying together.”

Minutemen leading scorer Weeks, who entered averaging 15.5 points per game, was held to four in the second half after scoring 11 in the first.

After recovering from a slow start to lead 39-35 at halftime, the Gamecocks struggled to separate from the Minutemen for most of period two.

Sy Chatman’s layup with 13:53 remaining capped a 7-0 run to give UMass its last lead at 50-47 before Jalyn McCreary’s jumper and four straight points from Couisnard restored South Carolina’s lead.

UMass responded with a 13-4 run to pull within two on Pierre’s desperation 3 with 6.2 seconds left, but Lawson hit both free throws to seal it.

“Down in the clutch, we knocked down some key free throws, and we had to get some key rebounds, which we did, and do some hustle plays, which we did,” Lawson said. “I feel like we had a lot of fight today.”

The Gamecocks led by four after closing the first half on a 31-19 run.

Weeks scored eight of UMass’ first 16 as the Minutemen built an early eight-point lead. The Gamecocks looked out of rhythm early with Lawson’s missed 3 and turnovers on three of their first four possessions.

Lawson’s floater capped a 10-0 run to give South Carolina its first lead at 20-19 with 6:37 left in the first. He scored eight straight over a three-minute span and all but two of his 13 first-half points in the final 8:15 of the period.

“We made a few mistakes, and they just capitalized on it,” Pierre said. “It felt like they didn’t really make too many mistakes outside of the first few minutes where they were throwing passes all over the place.”

It was the third-ever meeting between South Carolina and UMass and the first in Amherst.

South Carolina: With their first road win out of the way, the Gamecocks should have some confidence in playing two of their next four on the road - including a Dec. 22 contest against No. 5 Virginia. All four games will be non-conference affairs before South Carolina hosts Florida in its SEC opener on Jan. 7.

UMass: Nothing has gone right since everything went right to start the season for the Minutemen. UMass was denied its second 5-0 start at home in the last three seasons and has four non-conference opportunities remaining before opening its Atlantic 10 schedule at St. Louis on Jan. 5.

Bryant returned with a 5-for-9 night from the field in 22 minutes in his season debut after having surgery to repair torn cartilage in his knee in November.

“He’s a hard worker, and he’s gonna do what he’s gotta do,” Lawson said of Bryant. “Today he came and helped us a lot. I’m proud of him.”

Kotsar’s scoring streak might be over, but the senior still made his impact felt with a near double-double.

“He was rock solid today. We don’t win without him,” Martin said. “He’s playing at a high, high level for us right now.”

South Carolina has had a couple of early-season tests against Massachusetts teams. The Gamecocks fell 78-70 at home against Boston University on Nov. 19 before scraping out a win over UMass. Martin knows the state well, as his first coaching job was as an assistant at nearby Northeastern in 2000, and his wife Anya attended UMass.

South Carolina: The Gamecocks return home to face Houston on Sunday at noon.