Long pause over: Siena plays its first games, wins both 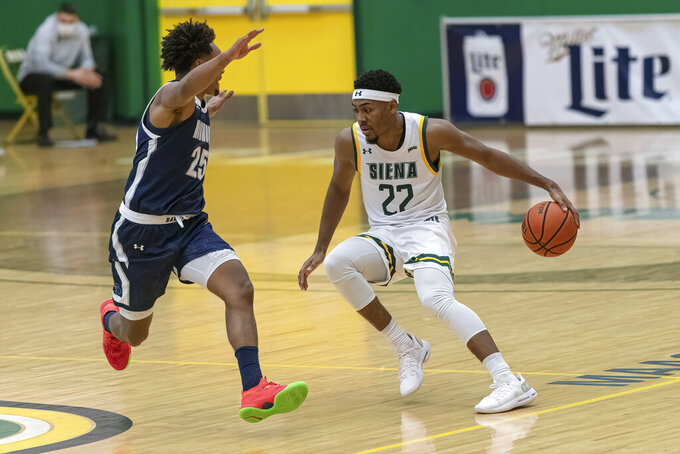 LOUDONVILLE, N.Y. (AP) — The reigning Metro Atlantic Athletic Conference men's basketball champions are back on the court at long last — after a 298-day hiatus.

After three pauses in team activities since November due to several positive COVID-19 tests, the Siena Saints returned to action with a two-game series at home against Monmouth (3-4) and won both — 78-77 in Sunday's opener and 76-62 on Monday night — to run their winning streak to 12 games dating to last season.

“Super proud of this group. Resilient group,” Siena coach Carmen Maciariello said. “We talk about coming together during adverse times and growing our togetherness and our bond, and I think we did that. We found a way to win.”

The Saints, who had to cancel December games against Drexel and Towson, hadn't played since beating Manhattan in the MAAC Tournament quarterfinals on March 11, the longest period of time between games since the program paused activities from 1943-46 while the country was at war. Siena experienced the pauses following multiple positive COVID-19 test results stemming from the program’s Tier 1 personnel and was the last MAAC team to get underway. It was the latest season-opener in program history, which dates to 1938.

“You’ve got to deal with the hand you’re dealt and make the most of the situation," Maciariello said.

The NCAA announced on Monday that its men's tournament would be played in Indianapolis beginning in mid-March, but Merrimack of the Northeast Conference, and Patriot League members American University and Loyola of Maryland were worried about something else — starting their seasons. They remained the only three Division I men's teams that haven't played a game after Boston University and Holy Cross of the Patriot League, which canceled all nonconference games before the season, finally played their first game later in the day (the eight-team Ivy League canceled its season in November).

For the Saints, who finished 20-10 last season to win the regular season and were awarded the MAAC Tournament title after play was suspended in March because of the novel coronavirus, the start of the new season was a very welcome moment. Since Nov. 12, the team had had just 11 days of full team activities, while fellow league members Iona and Marist had already played eight games.

“I don’t know how many practices we’ve had with a full team, where we could actually compete and play 5-on-5 and really have our conditioning where we need to be,” Maciariello said. “I love this team. Guys had the courage and the ability to take shots, make shots, make winning plays.”

With no fans currently allowed at games in New York because of health restrictions put in place to combat the pandemic, Siena is playing home games in its Alumni Recreation Center (ARC) on campus instead of at the Times Union Center in downtown Albany a few miles away, where the Saints regularly lead the MAAC in attendance by a wide margin (6,228 average last year).

The opener was the first regular-season game at the ARC since 1997, and with only cardboard cutouts of fans behind the benches, the coaches and players took the initiative, their shouts of “Defense! Defense! Defense!” echoing off the walls.

“Our bench did a great job of keeping the communication high and really cheering us on," said Siena junior point guard Jalen Pickett, who had 38 points and 20 rebounds in playing all but seven minutes in the two games. "I actually thought we had a crowd there with as loud as they were.

“That was something we talked about. We just had to bring the energy.”

Added sophomore forward Kyle Young: “We've still got to work hard. I feel that we've built a lot of team chemistry on and off the floor since we got here. Obviously, we got a late start. We didn't get to have a summer session. Right now, we're just focused on the season. It would be great if we could play at the TU with 6,000 fans, but it just felt great to get back on the floor with my team.”