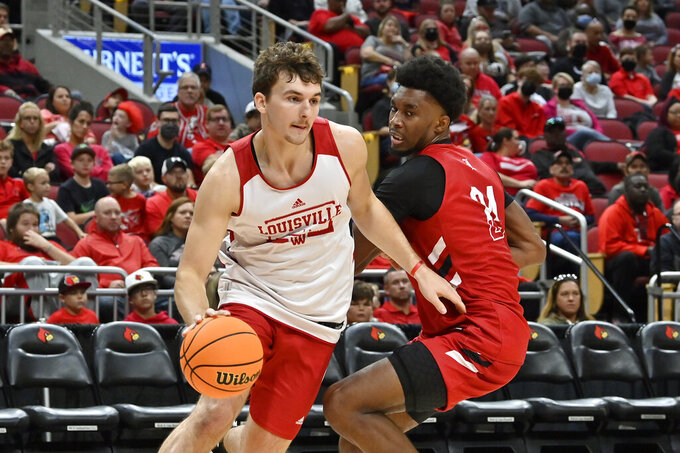 LOUISVILLE, Ky. (AP) — Chris Mack will have a lot of time on his hands in November watching Louisville basketball from a distance.

The fourth-year Cardinals coach is suspended the first six games this season by the school for failing to follow university guidelines in the firing of ex-assistant Dino Gaudio last spring. Though Louisville said in release that Mack was “the victim" of an extortion attempt — which culminated in Gaudio receiving a fine and probation after he pled guilty to a federal charge — Mack was still disciplined in the latest embarrassing episode for the men’s basketball program.

That will take Mack away from the squad he reshaped after missing last spring’s NCAA Tournament — and leave his calendar wide open during an ordinarily busy opening month.

“I have no idea what it’s going to be like, so I don’t think I can do a whole lot of anything,” said Mack, who can return on Dec. 1 at Michigan State in the Big Ten/ACC Challenge. “Take my kids to school. Sit tight until I pick them up.”

That development — which preceded amended NCAA allegations earlier this month for improper activities and recruiting moves — explains Mack’s intensity installing an up-tempo offense with a revamped roster featuring eight newcomers. Assistant coach Mike Pegues will be Louisville’s acting coach when he departs, but until then Mack is driving home every nuance of new assistant Ross McMain’s scheme — a dramatic upgrade from last year’s plodding attack that left Louisville 13-7 and outside the NCAA Tournament.

“I mean, I feel urgency every day and it puts me on pins and needles (for) Nov. 9, not being there,” Mack said of the work needed before the opener against Southern. “You’ve got a six-week chart from what you have to get in, where you’re constantly assessing where you feel like you’re at. You always feel that pressure.”

Mack has been encouraged by players’ determination to quickly build chemistry since arriving on campus. But he cautioned that work remains with several transfers among the new faces.

“It’s going to be big for us to get through those first six games and keep our heads high,” Williams said, “but I believe we’ll do a good job with it.”

Louisville assistant Mike Pegues enters his 10th season working under Mack, including six at Xavier. Mack called him a head coach in waiting, and players see no difference in his approach or expectations.

“Coach Pegues is a bright basketball mind, brings a lot of energy and he’s going to demand excellence from everybody on the court,” Williamson said. “We have the utmost trust and respect for coach Pegues and other coaches to step up with coach Mack out.”

Malik Williams addressed Louisville’s biggest personnel concern by taking advantage of the extra year of eligibility. Even better, he’s recovered from a second surgery on his right foot after being limited to just three games last season. His return helps restore the post presence the Cardinals lacked.

“I’ve gotten stronger, I’m closer to being back and I’m feeling better than ever,” the three-year captain said. “It’s just about continuing that through the preseason.”

Once on the margins of the rotation, junior wing Samuell Williamson raised his game last season and returns as Louisville’s top scorer. He looks to assume a bigger role in a faster scheme that suits him just fine.

“We’ll be able to play a much faster pace, have a lot more freedom and more interchangeable parts,” he said. “Less predictable, so I’m excited to play in the system.”

Louisville opens against Southern and will face Mississippi State on Nov. 25 in the Bahamas. Mack’s return begins a big December that includes the ACC opener at North Carolina State and meetings against DePaul and Western Kentucky before their annual showdown on Dec. 22 at rival and No. 10 Kentucky. The Cardinals face North Carolina twice in conference play, at home on Jan. 31 and in Chapel Hill on Feb. 21.