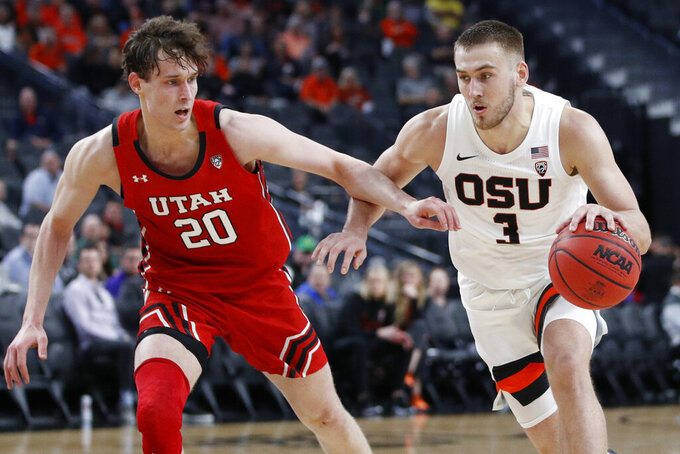 Oregon State's Tres Tinkle (3) drives around Utah's Mikael Jantunen (20) during the first half of an NCAA college basketball game in the first round of the Pac-12 men's tournament Wednesday, March 11, 2020, in Las Vegas. (AP Photo/John Locher)

LAS VEGAS (AP) — Oregon State watched Alfonso Plummer pour in one 3-pointer after another on his way to the Pac-12's all-time record.

Jarod Lucas hit the biggest 3 of the game, sending the Beavers into the Pac-12 tournament quarterfinals.

Lucas hit a 3-pointer with 1.8 seconds left and the Beavers withstood Plummer's conference-record 11 3-pointers to beat Utah 71-69 in the opening round of the Pac-12 tournament on Wednesday.

Making his second start in place of Rylan Jones (concussion protocol), the junior guard was one shy of Klay Thompson's tournament record of eight 3-pointers in the first half and finished 11 of 16 from the arc overall. He had 35 points.

“My teammates trust me,” Plummer said. “They give me the ball to shoot open shots.”

Ninth-seeded Oregon State (18-13) clawed back to pull within one late three times in the closing minutes. The Beavers had the ball down 69-68 and Lucas knocked down a corner 3 on a pass from Tres Tinkle.

Tinkle had 19 points and Lucas 12 to help the Beavers move on to Thursday's quarterfinals against No. 13 Oregon.

“Tres hit me and trusted me,” Lucas said. "Previously, there was a game where he trusted me and I missed it. I remember telling him, 'I'm sorry, it's never going to happen again.' Tres trusted me again, and I was able to knock it down."

Utah limped to the finish, losing five of its final seven games.

The Utes and Beavers split the season series, each winning at home.

The first half of the rematch was all about Plummer.

Plummer made his first start against Colorado on March 7, scoring 21 points with five 3-pointers.

He was just getting warmed up for the conference tournament.

Plummer, who averaged 7.4 points per game during the regular season, came out firing, confidently stroking in one 3-pointer after another. The junior guard had seven 3-pointers and 23 points to lead the Utes to a 39-31 halftime lead.

Plummer matched the tournament record to push Utah's lead to 13 and hit another to break it three minutes into the second half.

“Only time I've ever seen something like that was my daughter was in city league, but that doesn't really matter,” Wayne Tinkle said. “That's a joke.”

The Utes still couldn't put away the Beavers.

Oregon State went on a 15-3 run to pull within 50-48 and made another run after Utah tried to stretch the lead, pulling within 62-51 on Tinkle's driving layup with 3 1/2 minutes left. The Beavers kept fighting and gave themselves a chance to win it.

“They're always hard to take, regardless,” Utah coach Larry Krystkowiak said. “I wasn't ready to speak to our team at the end of the conference tournament. I didn't think it was going to happen quite yet.”

The Beavers showed a lot of resiliency, fighting back for a last-second win to get another shot at rival Oregon.

Plummer had a big game, but the Utes allowed Oregon State to hang around and, ultimately, knock them out of the bracket.

Utah awaits word if it will be invited to a smaller postseason tournament.