Miami holds on, Louisville on longest skid since 1940-41 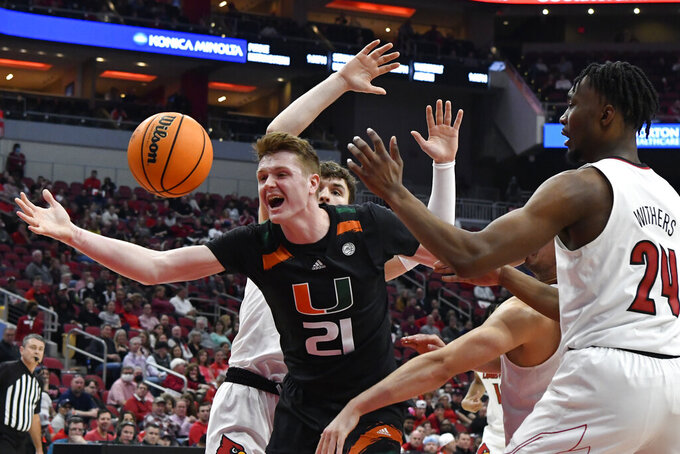 It was the Hurricanes' (19-7, 11-4 ACC) first road win against the Cardinals. Louisville's loss marks its first seven-game losing streak since the 1940-41 season.

Wong's four-point play with 3:31 left gave the Hurricanes a 64-54 lead before Louisville closed within three on a 7-0 run. But Kameron McGusty hit a jumper, Moore sank two fouls shots and Wong threw down a dunk in the last 35 seconds to quash the threat.

McGusty scored 14 points and Jordan Miller 10 on 5-for-6 shooting for the Hurricanes. Miami led for 36:29 of the game, including the entire second half.

Dre Davis sank 1 of 2 foul shots 3:30 in to give Louisville a 6-3 lead. Moore buried a pair of 3-pointers as Miami answered with a 13-0 outburst. Moore sank three 3s within the first five minutes.

Louisville never got within seven points in the first half following the Miami run and the Hurricanes led 35-25 at halftime.