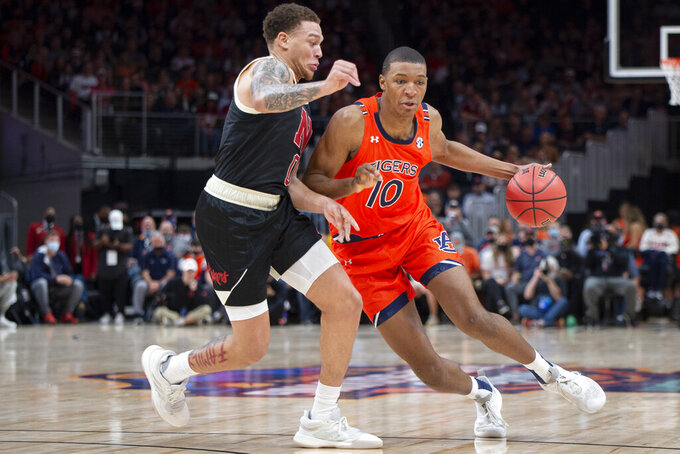 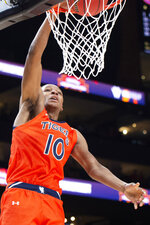 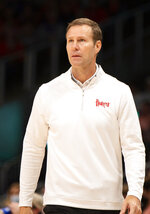 Pearl began his two-game suspension imposed by the NCAA on Friday. Auburn was placed on probation for four years for unethical conduct involving former associate head coach Chuck Person. Pearl was penalized for failing to monitor his assistant and adequately promote compliance.

Assistant coach Wes Flanigan, who served as acting coach, said the Tigers made a “big-time statement” with the runaway win.

“For four years we’ve been under a little cover of darkness,” Flanigan said of the NCAA investigation that led to Pearl’s suspension. “We’ll move forward, press forward with one more game without him, but can’t wait to get him back. ... I think it was just a sigh of relief that finally we had a decision.”

Center Walker Kessler and guard Zep Jasper each had five steals and Auburn scored 30 points off 20 turnovers. Jabari Smith had 21 points to lead the Tigers (8-1).

Auburn held Nebraska (5-6) without a basket for a stretch of almost seven minutes in the first half. The Tigers took control with a 13-0 run at the start of the Cornhuskers’ cold-shooting stretch.

Nebraska trailed by 21 points in the first half and again in the second half before cutting the deficit to 55-41 with a 7-0 run.

Auburn put the game away with a 14-0 burst that made it 76-47. The run included three 3-pointers by Wendell Green Jr., who scored 19 points.

Green said the players were excited to finally receive the NCAA verdict following the long investigation.

“Once we heard the good news it made us more excited to play today,” Green said.

Smith, a 6-foot-10 freshman from Fayetteville, Georgia, showed off his versatility by making three 3-pointers while also taking advantage of his height with two second-half jams.

Green had a steal before leading a fast break he capped by throwing the ball off the backboard to set up a crowd-pleasing jam by Smith.

Nebraska has a four-game losing streak.

“My biggest message to our team is we have a week to figure it out,” Nebraska coach Fred Hoiberg said. “We’re going to have a tough, physical week of practice.”

The Cornhuskers were unable to practice on Friday due to players missing time with a non-COVID 19 viral infection.

“I’m not going to use that as an excuse,” Hoiberg said.

Auburn led 12-9 before pulling away with a 13-0 run. Jaylin Williams sank a 3-point and added a three-point play during the stretch.

The matchup was the first of four games in the Holiday Hoopsgiving event at State Farm Arena.

Nebraska: Guards Keon Edwards and Sam Holberg did not travel after being held out of practice with a viral infection. Edwards is a part-time starter. Freshman Wilhelm Breidenbach, hurt his knee in Tuesday’s 102-67 loss to Michigan and also did not travel with the team.

Kevin Durant, still in Atlanta one day after he scored 31 points as his Brooklyn Nets beat the Atlanta Hawks 113-105 on Friday night, had a courtside seat. Former Auburn standout Charles Barkley, now an NBA analyst at Atlanta-based TNT, also watched from the stands.