Moore, Daniels lead No. 23 Villanova past No. 18 Xavier 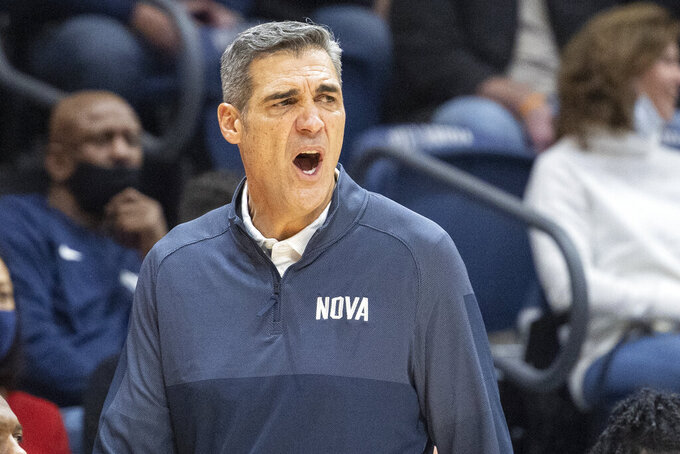 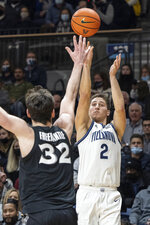 Collin Gillespie and Eric Dixon each had 15 points for the Wildcats (8-4, 1-1 Big East), who bounced back from consecutive blowout losses.

The Wildcats dropped 14 spots in the Associated Press Top 25 after a 79-59 loss at Creighton on Friday in their Big East opener and a 57-36 defeat at Baylor on Dec. 12 — the first time in coach Jay Wright’s 21 seasons Villanova lost consecutive games by 20 or more points.

And it looked like Villanova was on course for a third straight loss after the Musketeers dominated the first half and took an eight-point lead into the locker room. But the Wildcats turned up the defensive pressure in the second half and ran away from Xavier in the final six minutes.

“It was a good job by us of responding,” Moore said. “We did a great job of playing as hard as we can, defending and playing tough.”

Xavier missed its first four shots and committed five turnovers to start the second half, helping Villanova close within 39-37 on a Daniels 3-pointer. And the Wildcats took their first lead since early in the contest on Dixon’s layup that made it 42-41 with 14:02 to play. The game stayed tight for the next 7 ½ minutes, and Jack Nunge layup put Xavier in front 51-49 with 7:29 to play.

But Villanova took over from there.

The Wildcats scored the next eight points, capped by a Gillespie 3-pointer with 4:43 left that gave them their biggest lead to that point, 57-51. And Villanova kept rolling. Moore’s layup with 1:32 remaining gave Villanova a 10-point advantage and put the game away. The Wildcats avoided just the third three-game losing streak under Wright since 2013.

“That second half was one of our best halves defensively so far this year,” Wright said.

Xavier was 0 for 14 from long range in the second half.

The Musketeers made 6 of 9 3-point shots in the opening 20 minutes, including a misfired entry pass from the top of the key by Odom that instead of finding a teammate got nothing but net. The Wildcats, meanwhile, continued their recent shooting slump by missing 9 of 10 3-pointers. Still, a Daniels dunk on Villanova’s final possession of the half brought the hosts within 38-30 and gave them momentum heading to the second half.

The Wildcats improved to 15-2 against Xaiver since the Musketeers joined the Big East in the 2013-14 season and 6-0 at the Pavilion, their on-campus home court.

The victory was a culmination of a strong few days of practice.

“They’re young, they’re resilient, they’re confident, they actually inspire us,” Wright said. “Coaches can get negative about every little thing, but (the players) have been great this week.”

The low spot in the AP Top 25 is not a familiar one for the Wildcats, who have been a stalwart in the Top 10, especially since winning two of their three national titles in 2016 and 2018. Three Big East teams – No. 15 Seton Hall, Xavier and No. 22 Providence – began the week ahead of Villanova.

“When we are ranked highly I always say that it doesn’t matter until really the end of the year,” Wright said. “It’s something that is good for fans, good for the game. I love it. … but it really doesn’t have any impact on us.”

Xavier: After six days off, the Musketeers are at home against UConn on Dec. 28.

Villanova: The Wildcats take a break from the Big East to wrap up the Philadelphia Big 5 portion of their schedule with their next game, hosting Temple on Dec. 29. Villanova won its three previous Big 5 games this season, over La Salle, Penn and St. Joe’s, by a combined 70 points.