Moore scores 16 to help No. 15 Villanova hold off St John's 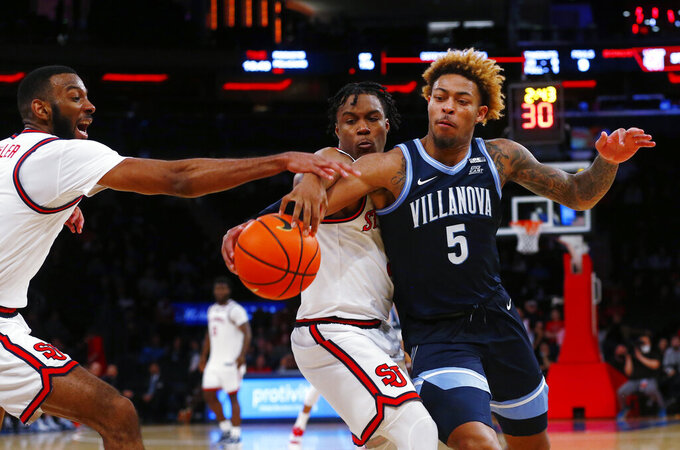 Justin Moore scored 16 points on a sore ankle and the No. 15 Wildcats held off a furious late charge by St. John's in a 75-69 victory Tuesday night at Madison Square Garden.

Eric Dixon also had 16 points and the Wildcats (18-6, 11-3 Big East) overcame a scoreless outing by Gillespie, their banged-up star, to stay two losses behind first-place Providence in the conference standings.

“I was proud of our guys sticking it out, playing for the whole 40 minutes,” Villanova coach Jay Wright said.

Aaron Wheeler rallied St. John's (13-10, 5-7) with 31 points — 14 more than his previous career high. The cold-shooting Red Storm trailed by 20 with under four minutes left but suddenly started making plays on both ends.

They shaved the deficit to 72-69 with 35 seconds remaining on a 3-pointer by Wheeler, a graduate transfer from Purdue. Tareq Coburn made a steal and St. John's, minus injured point guard Posh Alexander, actually had a chance to tie it when Coburn got a good look at a 3 but missed.

“It's just amazing to me what happens at the end of games,” Wright said. “It's incredible. You can play that well and the game can go a certain way for that long and then all of a sudden everything changes. I honestly don't have an answer for you.”

Jermaine Samuels sank a pair of free throws and Brandon Slater added another to finally seal it.

Slater had 15 points and seven rebounds for Villanova, which led for nearly 38 minutes. Samuels and Caleb Daniels each scored 13.

Gillespie, the third-leading scorer in the Big East at 17.2 points per game and the conference's co-player of the year last season, went 0 for 5 from the field and failed to score for the first time since he was a freshman on Villanova's 2018 national championship team.

Clearly diminished by a sprained right ankle, the 6-foot-3 senior found a way to contribute in other ways during 26 minutes on the court, grabbing a team-leading 10 rebounds — his most this season.

“Guts, man,” Wright said. “I mean, the trainer told me he's not going to be able to play and then in warmups he said, `I wanna try it.' We were thinking we start him and probably take him out two-three minutes in.”

Gillespie, however, told Wright he could go.

“So we played him as much as we could. His presence out there is so important for us whether he's scoring or not. He's our leader, and the guys respect him so much,” Wright said.

Gillespie and Moore, the Wildcats' top two scorers, both started after the veteran guards were game-time decisions. Gillespie missed the final 6:53 of Saturday's win over UConn and Moore (sprained left ankle) sat out the entire game.

It was perhaps a pleasant surprise for Villanova — neither one practiced Monday and Wright didn't sound too optimistic about either playing.

Instead, it was Alexander who was unavailable because of a sprained right ankle — leaving the Red Storm without last season's Big East freshman of the year and the frenzied engine who makes them go.

Alexander got hurt late in Saturday’s win at Butler and spent this one sitting on the bench in grey sweats and a large walking boot.

“We needed a lot of guys to step up tonight. We knew we were shorthanded,” Wheeler said. “We knew it was going to be a collective effort and I was proud of the guys that stepped up.”

Villanova: Improved to 11-2 since consecutive road losses by at least 20 points against then-No. 2 Baylor and Creighton in December. Both defeats during that stretch have come against Marquette. The Wildcats have been kings of the reconfigured Big East for years, but they have a serious challenger this season and are headed toward a showdown at Providence next Tuesday night in the first of two scheduled meetings.

St. John's: After winning two Big East road games in three days last week, the Red Storm were unable to follow it up against a top-flight opponent without Alexander. Playing their fifth game in 11 days, they dropped to 0-5 versus ranked teams and are running out of opportunities for a signature win that could start to build any semblance of a postseason resume.

St. John’s star Julian Champagnie, bothered by hip and finger injuries, was held to 12 points on 4-of-15 shooting in 31 minutes. He was shaken up after a hard fall late in the first half and stayed in the game, but then began the second half on the bench before checking in a few minutes later. ... Starting guard Montez Mathis went 1 of 14 for the Red Storm, who shot 32% from the floor.

Villanova: Three days of much-needed rest before hosting Seton Hall on Saturday afternoon. Gillespie scored 21 points in a 73-67 road victory on New Year's Day over the Pirates, then ranked No. 15 in the nation.

St. John’s: Back at Madison Square Garden to host No. 24 Connecticut in a noon start on Super Bowl Sunday. It will be the second road game for the Huskies in a span of 41 hours, although they'll probably have plenty of fans in the building. St. John's nearly stole one at UConn on Jan. 12 but lost 86-78 in overtime despite 27 points from Champagnie.