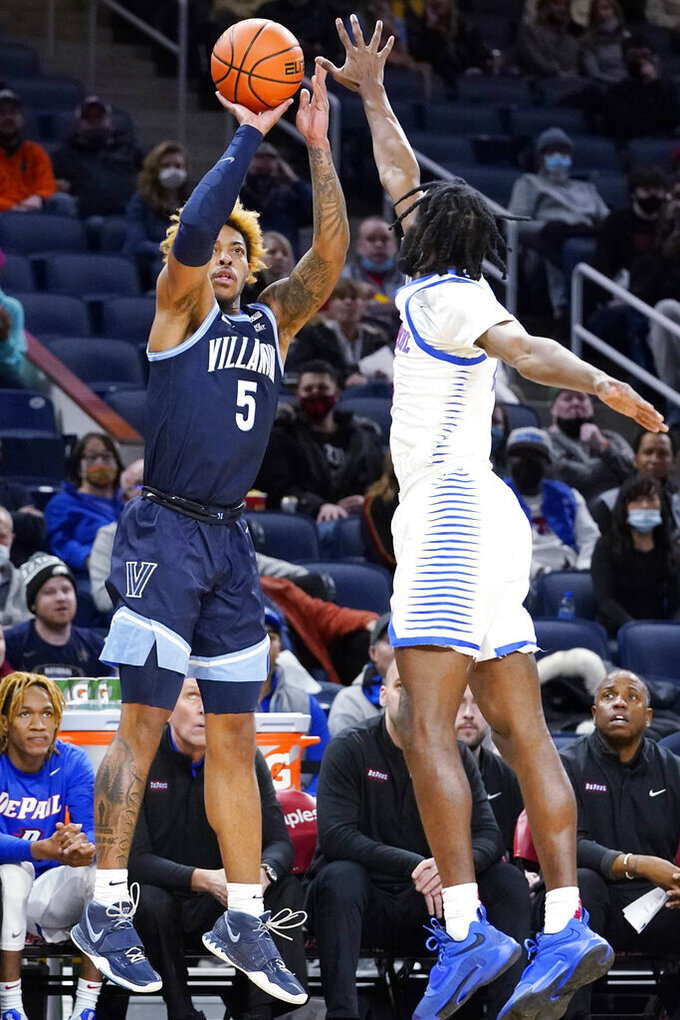 At the start of the season, it looked as if 2022 would be one of those rare years when the Big East didn't have a player sure to be taken in the first round of the NBA draft.

St. John's Julian Champagnie appears to be playing himself into position to be among the first 30 players selected.

The 6-foot-8, 215-pound junior established himself as one of the Big East's premier players last season when he led the league in scoring and was named to the all-conference first team.

This season, he is second in the conference in scoring and in the top 10 in rebounding, overall field-goal percentage, 3-point percentage, steals and blocks. He has scored in double figures in 44 straight games, including 23 outings with at least 20 points.

“Nothing surprises me with this kid because he is one of the hardest working kids," Red Storm coach Mike Anderson said. “I’ve had some pretty good kids that worked hard — Joe Johnson played for us at Arkansas, and Bobby Portis. He’s in that mold in terms of putting time in on his game. It’s good to see it pay off for him.”

Most draft prognosticators listed Champagnie as a second-round pick at the start of the season. He appeared in the middle of the first round in USA Today's most recent mock draft.

Champagnie raised eyebrows last week with a monster performance in his first game back from a case of COVID-19. After having not played a game in 24 days, he had career highs of 34 points and 16 rebounds while leading the Red Storm to an 89-84 win over DePaul.

“I jumped right into workouts my first day out. I was in the gym for four hours," he said. “Getting in the gym, getting my rhythm back, my shot back is what helped me pushed forward.”

Champagnie struggled with his shot in his next outing, missing all eight of his 3-point tries and finished with 11 points in a 83-73 loss to Providence, his lowest output since March 2020.

“Julian Champagnie led the Big East in scoring as a sophomore and hasn’t missed a beat this season,” BasketballNews.com wrote in its analysis. “Considering that NBA teams highly covet players with positional size and an ability to shoot the ball, he has the potential to be an immediate-impact prospect in the 2022 NBA draft.”

STRENGTHS: Can score from almost anywhere on the floor, excellent 3-point shooter and shot creator, physical on the wing, good defender.

Other prospects around the Big East:

G AMINU MOHAMMED, GEORGETOWN: The 6-5, 210-pound freshman has lived up to the expectations that come with being named Big East preseason freshman of the year. He's tied for first in the conference with five double-doubles, leads the Hoyas in scoring (14.8 ppg) and the Big East in rebounding (8.5) and gets to the free-throw line as much as anyone in the league.

F JUSTIN LEWIS, MARQUETTE: The 6-7, 245-pound redshirt freshman has continued to grow his game since emerging last season with his buzzer-beating tip-in to beat a top-five Wisconsin. He's a physical and athletic presence around the basket, averaging 15.1 points and 7.8 rebounds, and a strong defender.

G JUSTIN MOORE, VILLANOVA: The 6-4, 210-pound junior continues to be a reliable offensive threat and is the Big East player of the week after totaling 43 points in wins over Creighton and DePaul. He's a pure shooter, especially from range, and is averaging 15.7 points per game.