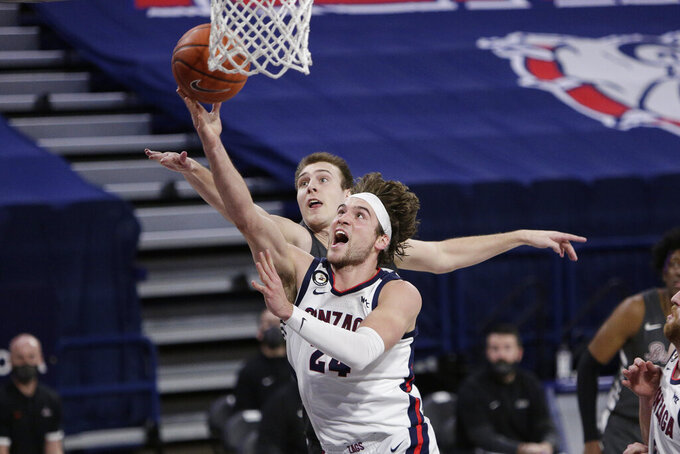 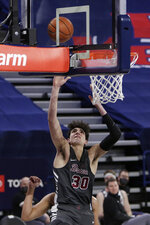 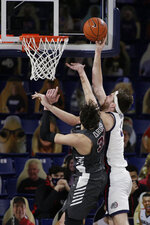 SPOKANE, Wash. (AP) — Corey Kispert scored 25 points, Drew Timme had 16 of his 18 points in the second half and No. 1 Gonzaga won its 50th straight at home, beating Santa Clara 89-75 on Thursday night.

The Bulldogs won their 27th straight overall dating to last season, but struggled to shake the Broncos for most of the night.

Timme was a big reason why Gonzaga (23-0, 14-0 West Coast Conference) was finally able to pull away in the second half. Limited to just eight minutes in the first half due to foul trouble, Gonzaga’s primary interior scorer made 7 of 9 shots as the Bulldogs pulled away from a 40-38 halftime lead.

Jalen Suggs nearly had a triple-double finishing with 13 points, 11 rebounds and eight assists, and Joel Ayayi added 11 points for Gonzaga.

Guglielmo Caruso led Santa Clara (10-7, 4-5) with 19 points, and Giordan Williams added 18. The Broncos led by 10 early in the first half and held the advantage for most of the first 20 minutes before Gonzaga pulled ahead just before the break.

Santa Clara hung around for most of the second half and trailed just 73-66 after Josip Vrankic’s layup with 6:44 left, but could get no closer.

Gonzaga had trailed for only 50 seconds total in 10 home games going into Thursday’s matchup. The Bulldogs ended up trailing for 11:27 of the first half as the Broncos provided a formidable challenge.

Gonzaga had not trailed in nearly 172 minutes of game time before falling behind in the opening minutes to Santa Clara.

Santa Clara: Coming off a lengthy break without games in late January and early February, the Broncos should go into the West Coast Conference tournament in Las Vegas with confidence after a win over Pepperdine and playing the Bulldogs as tough as anyone in the WCC this season.

Gonzaga: The Bulldogs were sloppy committing 16 turnovers. It was the third-highest total in a game this season and most since committing 17 against Pepperdine in mid-January.

Santa Clara: The Broncos next game is expected to come in the WCC Tournament.