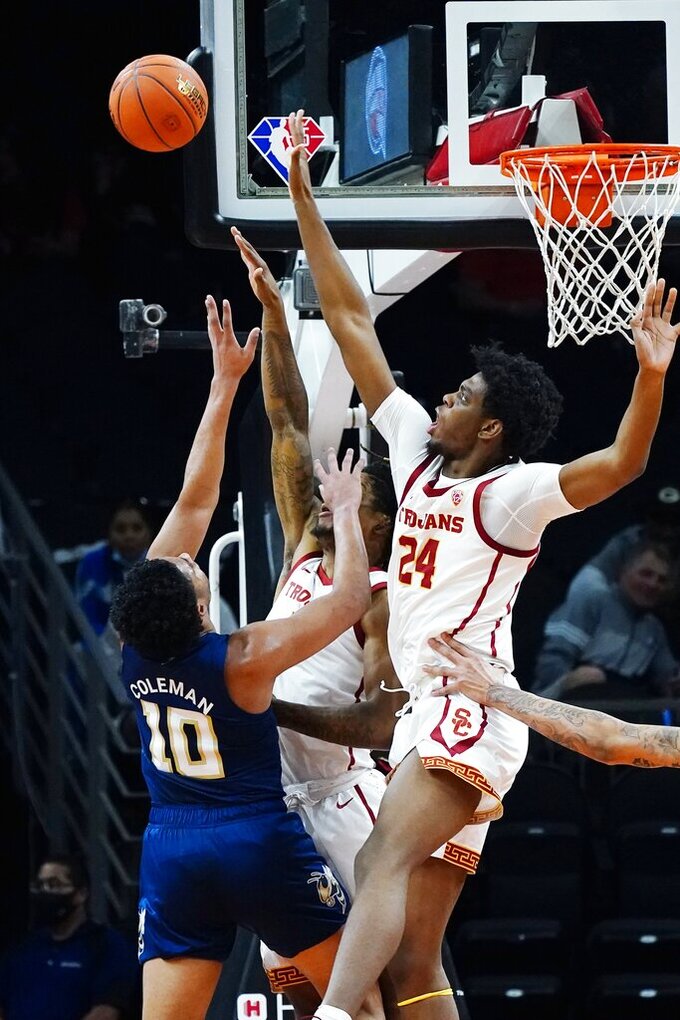 Georgia Tech guard Dallan Coleman (10) tries to get off a shot over Southern California forward Joshua Morgan (24) and guard Isaiah White during the first half of an NCAA college basketball game at the Jerry Colangelo Classic Saturday, Dec. 18, 2021, in Phoenix. (AP Photo/Ross D. Franklin)

Once the Trojans became more aggressive, the Yellow Jackets couldn't stop them.

“Our players just have to keep shooting,” USC coach Andy Enfield said. “We were hesitant early in the game, turned down some open shots to drive it, then we were hesitant with our passing. Once we were more aggressive and flowed into a good offensive rhythm, I thought we played really well.”

The Trojans (11-0) needed some time to solve Georgia Tech's aggressive zone, relying on their defense early before pulling away from the Yellow Jackets. USC went on a big run to lead by nine at halftime and kept making shots in the second to remain undefeated.

Ellis was the ringleader, hitting 7 of 14 shots and grabbing seven rebounds after scoring 19 points the four previous games combined.

“It was just realizing I can't rely on my jump shot so much,” Ellis said. “Just taking what the defense is giving me. I feel like the last few games I haven't really been getting inside the paint.”

Georgia Tech (5-5) has labored through a gauntlet of tough games, losing to Wisconsin, North Carolina and No. 19 LSU before arriving in the desert. The Yellow Jackets' biggest issue has been scoring — 207th in Division I — and it continued against the long, athletic Trojans.

Georgia Tech had some good moments in the first half but finished 33% from the floor and 5 for 19 from the 3-point arc.

“At some point we've got to put the ball in the basket. That's kind of been a thing with us,” Georgia Tech coach Josh Pastner said. “We were better on turnovers, but we've got to score. We had some really good looks today. Unfortunately, they didn't fall.”

The Trojans have shown no letdown in their follow-up to last year's Elite Eight run, locking down teams while dominating in the paint.

The Trojans were at it again, but had all kinds of problems with Georgia Tech's zone early, missing 12 of their first 14 shots — 1 for 6 from 3 — with four turnovers in the first seven minutes.

Working the ball better around Georgia Tech's zone, USC hit five 3-pointers and got into the lane for a couple of close-range shots during a 23-4 run to go up 33-18.

The Yellow Jackets had their own offensive problems. They had an early 9-0 run and scored the final six points of the first half but shot 10 of 30 to trail 33-24.

The trend continued in the second half.

The Yellow Jackets' defense triggered a 10-0 run — USC went scoreless for nearly five minutes — to pull within six, but Peterson hit a 3 and USC closed it out to send Georgia Tech to its fourth straight loss.

“It's frustrating to go on this losing streak we have going on,” Devoe said. “But it's basketball. There's highs and lows in it, but we've got to stay together as a team and get better.”

USC had some moments that had Enfield throwing his arms in the air, particularly at the start, but locked down defensively and figured things out offensively.

USC got to see two familiar faces on the opposing bench.

Georgia Tech guards Jordan Usher and Kyle Sturdivant both transferred from USC and helped lead the Yellow Jackets to the NCAA Tournament last season for the first time in a decade.

The Trojans were happy too see their former teammates but also didn't want them to leave the desert with a win.

Usher finished with 11 points and Sturdivant had five.

“I give Jordan and Kyle a lot of credit. They’ve improved,” Enfield said. “Georgia Tech won the ACC Tournament and went to the NCAA Tournament and those guys are a big part of what they're doing. It's great to see their success in their hometown of Atlanta.”

USC plays Oklahoma State in the Compete 4 Cause Classic in Oklahoma City on Tuesday.