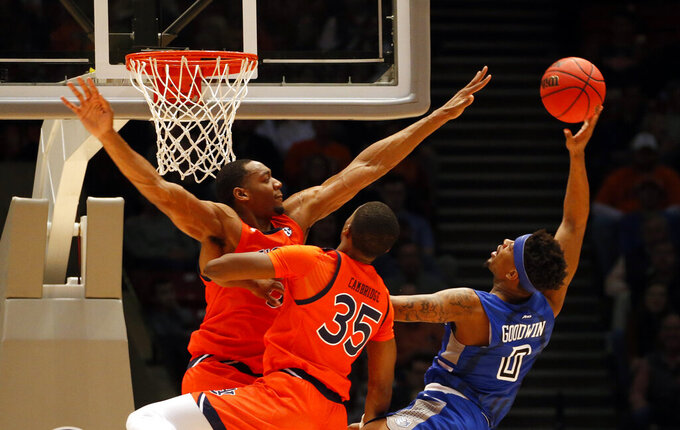 The teams struggled to generate offense early, but the Tigers used physical defense, feeding into transition buckets to create separation in the second half.

“We did enough of what we needed to do to win,” Auburn coach Bruce Pearl said. “Defensively, we were terrific, and J’Von McCormick was the best player on the floor.”

The Tigers started 0 of 5 from the field and looked confused early on in half-court sets due to Saint Louis throwing a variation of defensive looks at the SEC’s lone unbeaten. The Billikens led 8-0, but poor shooting from the free-throw line, and from beyond the arc, kept them from building a larger lead.

Auburn failed to find a rhythm in the first half, shooting just 33% from the field and 4 of 10 from the free-throw line, but shot 50% from 3-point territory in the second half. The Tigers comfort level went up with the pace of play, forcing 12 turnovers and getting out to run against the Billikens.

"They had a career day by their point guard. ... He was a one-man band there for a while, I thought,” Saint Louis coach Travis Ford said. “He took advantage of some opportunities. Give him credit. I told him after the game that he was the difference in the game, plain and simple, by a wide margin."

Saint Louis: The Billikens came into the game second to last in the country in free-throw percentage, and finished 8 of 19 from the line. Saint Louis' offensive struggles were apparent beyond the arc as well, shooting just 17% from the 3-point line.

Auburn: The Tigers are one of five teams remaining undefeated teams in college basketball.