No. 16 Tennessee, No. 23 Arkansas two of SEC's hottest teams 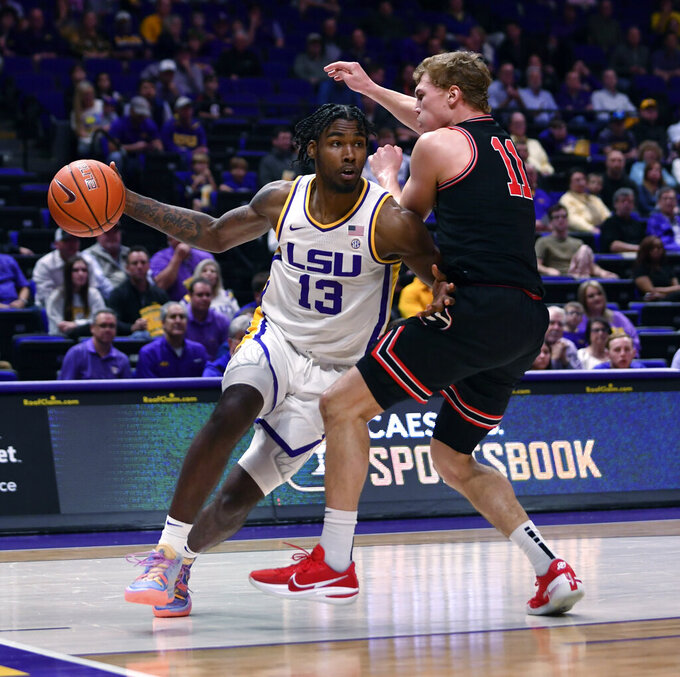 A look at weekend action around the Southeastern Conference:

LSU forward Tari Eason is averaging 23 points and nine rebounds during the Tigers' three-game winning streak after losing six of seven. His run includes 21 points, nine rebounds and three steals in Wednesday night's 84-65 rout of Georgia. The 6-foot-8 sophomore is averaging 19.5 points and 6.3 boards this month. Eason ranks fifth in SEC scoring (career-best 16.8 points per game) on 53% shooting and is eighth in rebounds (7.0).

Tennessee has won eight of nine since last month’s 107-79 blowout loss at Kentucky that no doubt motivated the Volunteers' 76-63 payback Tuesday night in Knoxville. Their only loss in this stretch was 52-51 to Texas in the SEC/Big 12 Challenge on Jan. 29. Since then they’ve won by an average margin of 13 points and held South Carolina, Vanderbilt and Kentucky below 41% shooting. The Vols face a challenging stretch with a visit to Missouri on Tuesday before a Feb. 26 showdown against first-place Auburn at home, where they are 14-0 this season. A return match against Arkansas looms on March 5.

Alabama junior Jahvon Quinerly had 21 points in Wednesday's victory over MSU, his fourth 20-point outing this season. ... LSU senior forward Darius Days had 15 points and 12 rebounds against Georgia and is averaging 11.7 points and 8.0 boards during the Tigers' three-game winning streak. ... Arkansas coach Eric Musselman achieved his seventh consecutive 20-win season and third in a row with the Razorbacks, who reached the milestone for the 35th time in school history. ... Kentucky shot a season-low 34% (23 of 67) at Tennessee and allowed a season-high eight blocks. ... Last-place Georgia has dropped 14 of 15 and lost by an average margin of 13.6 points this month alone.

Top-ranked South Carolina (23-1, 11-1) faces No. 13 Tennessee (21-4, 10-2) on Sunday in a nationally televised game between the league’s top two teams. The Gamecocks beat Auburn on Thursday night for their 12th consecutive victory. Included in the run was Sunday’s 72-54 defeat of No. 17 Georgia. The Lady Vols had consecutive 14-point wins over Missouri and Vanderbilt before falling to Alabama on Thursday night.