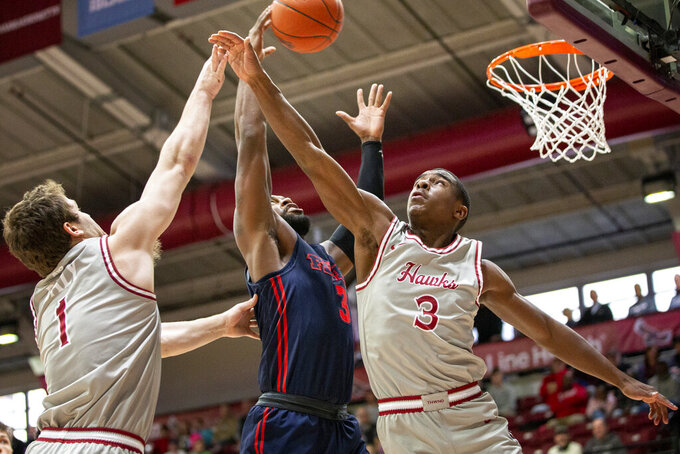 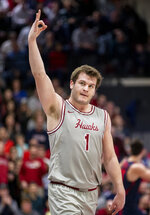 PHILADELPHIA (AP) — With Obi Toppin on the bench early in the second half against Saint Joseph's with four fouls, Dayton showed the depth that has it atop the Atlantic 10.

Trey Landers and Ryan Mikesell each had 18 points as the 20th-ranked Flyers fought off some early sluggishness and pulled away for an 80-67 win over the Hawks on Sunday.

“We have a lot of weapons,” said Landers, who shot 5 for 6 to score 13 second-half points and finished with nine rebounds. “We know that Obi is the most dominant player on the floor almost every time he’s out there. But we know that when he gets in foul trouble, we can weather the storm and deal with the adversity that comes with it. And when he went out, we all looked at each other and said, ‘Let’s go play.’”

For the second time this week, Dayton (11-3, 2-0 Atlantic 10) ended a significant road drought against an Atlantic 10 foe, breaking a nine-game losing streak at Hawk Hill that dated back to a 66-62 victory over Saint Joseph’s on Jan. 29, 2000. On Thursday night, the Flyers beat La Salle 84-58, snapping a seven-game road losing streak dating to 2011 in that series.

“Anytime you can start the league with two wins on the road in a row, that’s a good thing,” Dayton coach Anthony Grant said. “We were aware of the history here in Philly. We embraced the challenge of doing something that not many at Dayton have had a chance to do. We played really well against La Salle and we were excited about that. We were able to answer some adversity today and going through those experiences will help us grow as a team.”

Toppin and Ibi Watson scored 15 points apiece for the Flyers and Jalen Crutcher had 10.

“What makes Dayton a Final Four-caliber team is their commitment to Dayton basketball is outstanding and you get them on the court and they have a lot of weapons,” Saint Joseph’s coach Billy Lange said.

Dayton led 46-44 when Toppin picked up his fourth foul and was sent to the bench at the 14:40 mark of the second half. Landers, Watson and Crutcher became more involved in the offense, switching back and forth with cuts to the basket that had the Hawks confused.

By the time Toppin returned to the game with 3:12 left, Dayton had stretched its lead to 71-64. Landers' 3-pointer and a windmill dunk by Toppin put the Flyers ahead by 12.

Dayton: With several Top 25 teams losing the past week as conference play got underway, Dayton will likely move up from No. 20 when the new AP rankings are released on Monday.

St. Joseph’s: The Hawks have lost 10 of 11, but played two of their better games of the year against ranked opponents — a 78-66 loss to Villanova on Dec. 7 and Sunday against the Flyers.