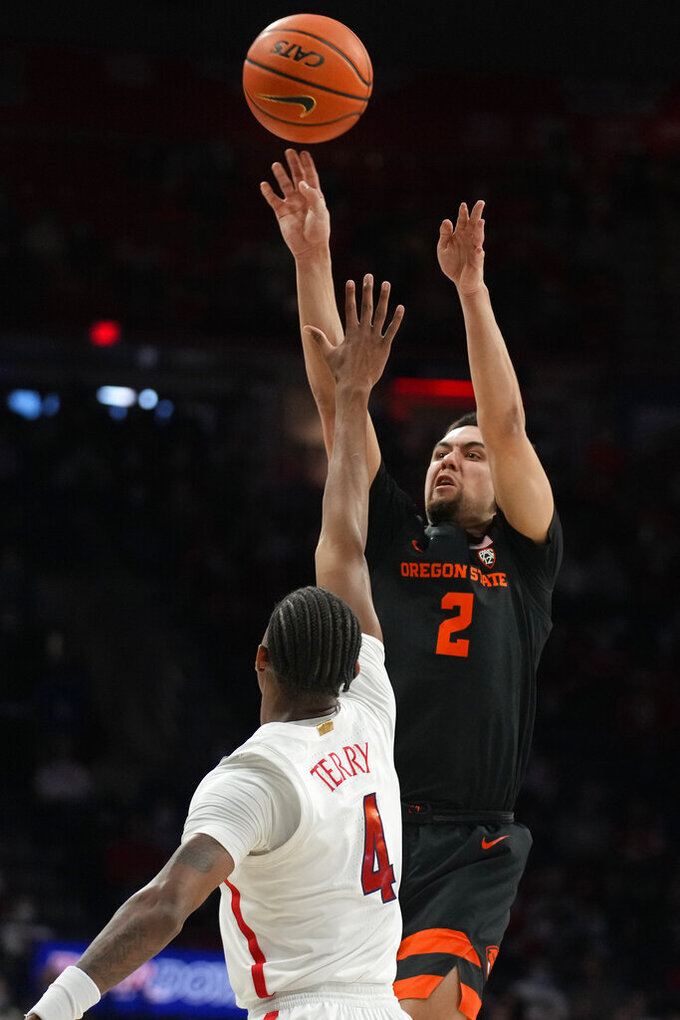 TUCSON, Ariz. (AP) — Tommy Lloyd's first season as the coach of the Arizona Wildcats has been nearly flawless.

He admitted this wasn't his best moment, even if the final result was just fine.

Azuolas Tubelis scored 22 points, Bennedict Mathurin added 20 and No. 3 Arizona pulled away in the second half after a slow start to beat Oregon State 83-69 on State on Thursday night.

“I'm going to wear that one today,” Lloyd said. “That's on me. We got a little too tricky with our game-planning. To be a good team, you can't trick the game.”

It all worked out in the end for Lloyd and the Wildcats (23-2, 13-1 Pac-12), who have won seven straight and maintained a two-game advantage in the conference. Christian Koloko added 16 points on 8-of-11 shooting and had nine rebounds.

Tubelis and Koloko were terrific close to the basket, allowing Arizona to shake off a tough shooting night from long range. The Wildcats were just 4 of 18 (22.2%) from behind the arc but scored 52 points in the paint.

“That's a good thing about our team,” Koloko said. “We've got different pieces. When we're not shooting well, we still have bigs like me, Oumar (Ballo) and Azoulas. They just deliver it inside and every time we get the ball, we play hard.”

Oregon State (3-21, 1-13) has lost 11 straight, going winless since beating Utah on Dec. 30. The Beavers have had a tough time with injuries this season and had just seven scholarship players available on Thursday.

Even so, they put up quite a fight in the first half. Warith Alatishe made a corner 3-pointer just before the halftime buzzer to cut Arizona's advantage to 44-42 going into the break.

“Our guys really bought in to executing our stuff,” Oregon State coach Wayne Tinkle said. “What's cost us at times is when we get off page, do our own thing, and that adds to frustration offensively and defensively. Our guys were locked in and we made some shots.

“I really thought the last couple minutes of the first half to get back into it was a great reward for our focus.”

But the Wildcats quickly pulled away in the second half, pushing ahead 57-45 in less than four minutes after Koloko's dunk. Arizona shot 52.5% from the field and had a 42-32 rebounding advantage.

“The points in the paint — they just manhandled us in the second half," Tinkle said. “It is a battle to play these guys for 40 minutes. They're so stinking athletic in transition. I think they're one of the top teams in the country.”

Oregon State: It was a solid effort for much of the night from the Beavers, who still haven't been able to win a game in 2022. They've been competitive in a lot of games but simply get overmatched in the talent department by teams like Arizona.

Arizona: It wasn't the best game for the Wildcats, particularly on defense in the first half, but they shook off Oregon State's early run to pull away for the comfortable win. Arizona's offense can come from a lot of different places, especially when Mathurin, Koloko, Tubelis are all on the floor.