No. 4 Arizona turning heads early in the season 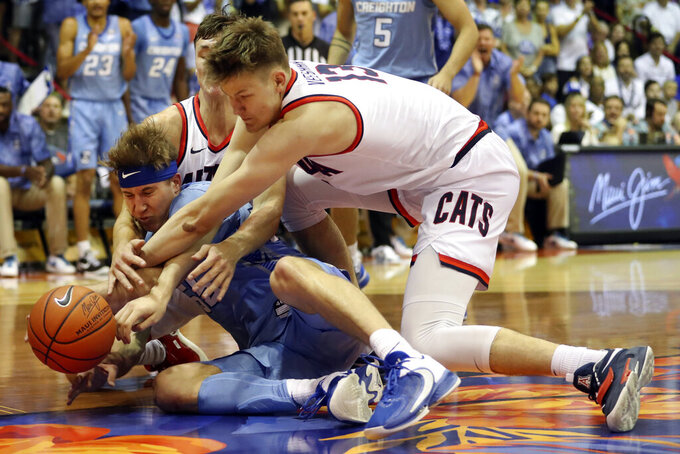 TUCSON, Ariz. (AP) — Arizona coach Tommy Lloyd knew there was talent on his roster. He wasn’t exactly sure how good the team would be.

The former longtime Gonzaga assistant had a similar view of last year's team and that one turned out to be pretty good, running all the way to the NCAA Tournament Sweet 16.

This year's team could end up being even better.

Buoyed by transfers and improved returning players, Arizona has rolled through the early part of its schedule, climbing to No. 4 in this week's AP Top 25 after winning the Maui Invitational.

“I learned that we’re good,” Lloyd said. “We’re tough. We’re gritty. I think there’s going to be some great things for us to really double down on and some things to show our guys where we went the wrong way.”

Lloyd had a superb first season in the desert, earning coach of the year honors last season with a team that lost three players to the NBA.

The Wildcats (6-0) had to replace three NBA players again this season. Again, they made a seamless transition.

Improvement on the part of the returning players has been a big part of it.

Oumar Ballo, considered a project as a freshman at Gonzaga, has transformed into one of the nation's best big men. The 7-foot, 260-pound center from Mali has vastly improved his footwork and developed patience in the post, setting himself up for good shots instead of trying to bull his way to the basket.

Ballo is averaging 19 points and 10 rebounds while shooting 76.7% from the field, fourth-best nationally. He was named Maui Invitational MVP after finishing with 30 points and 13 rebounds against No. 7 Creighton in the title game.

Not bad for a player who averaged 2.5 points and 6.3 minutes per game two years ago at Gonzaga.

Fellow big man Azuolas Tubelis has made a few strides of his own, adding strength and toughness to his athletic, fluid game. The 6-10 forward leads Arizona with 19.3 points per game while grabbing 8.0 rebounds.

Fiery point guard Kerr Kriisa has rounded into a reliable floor leader, averaging 15.3 points and 7.5 assists while shooting 51% from the 3-point arc.

"I don’t pay attention to the antics because they don’t mean anything to me,” Lloyd said. "I know maybe that draws attention to him from other people but when it comes to just pure basketball, I mean he is doing a good job and I think he is really showing something.”

So is Courtney Ramey.

The Texas transfer has given the Wildcats a huge boost in his first season in Tucson, providing hounding defense, leadership and another scoring option. He's averaging 16 points per game and has hit 10 of 16 from 3-point range so far this season.

Campbell transfer Cedric Henderson Jr. has provided an athletic lift off the bench and 7-foot Estonian Henri Veesaar has given Arizona solid minutes.

The mix of new and old has helped Arizona lead the nation with 97.5 points a game and rank second with 21.8 assists per game. The Wildcats climbed 10 spots in this week's poll after wins over Cincinnati, No. 24 San Diego State and Creighton.

“It was good to get the recognition, but we’re not satisfied," Ramey said. “Our ultimate goal is to be No. 1 at the end of the season and be the final two teams playing, so I think the regular season matters but it’s not the ultimate goal for us.”

The Wildcats are certainly off to a good start.