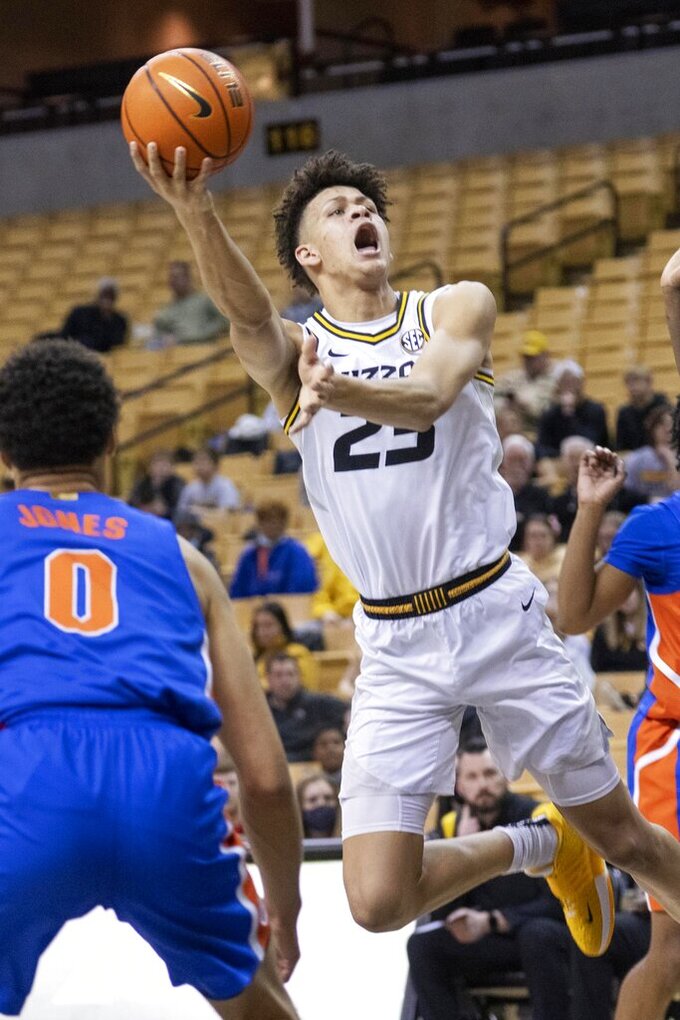 No. 5 Kentucky (20-4, 9-2) rides a five-game winning streak into a game against similarly hot Florida (16-8. 6-5), which has won four straight. The Wildcats are only a game behind No. 1 Auburn in the SEC standings with the Tigers' 80-76 overtime loss at Arkansas. Kentucky, meanwhile, beat South Carolina 86-76 to reach 20 wins for the 13th time in the past 14 seasons. Oscar Tshiebwe had his sixth straight double double with 18 points and 14 rebounds. Florida withstood a comeback attempt in a 72-63 win over Georgia. The Gators had overcome deficits of 13 and nine (twice) points in their previous three wins. The Tigers, meanwhile, try to rebound from a loss at red-hot Arkansas that snapped a 19-game winning streak.

Walker Kessler, Auburn: The Tigers' 7-foot-1 center has put up big numbers almost across the board over the last four games. Kessler is averaging 15.3 points, 12.3 rebounds and 5.75 blocks during that span. He has made 26 of 38 shots, or 68.4%. Kessler had 16 points, 19 rebounds and seven blocks before fouling out in an overtime loss to Arkansas. The North Carolina transfer's average of 4.33 blocked shots per game ranks second in the nation.

Suddenly, Arkansas (19-5, 8-3) has the SEC's longest current winning streak. The Razorbacks took care of that in beating Auburn at Bud Walton Arena for their ninth straight victory. JD Notae, the league's top scorer, finished with 28 points and four blocked shots. Arkansas has held opponents below 40% shooting eight times during the current winning binge. It was the second time in 13 tries that the Razorbacks had beaten the No. 1 team.

LSU is 15-0 with the starting lineup of Xavier Pinson, Brandon Murray, Mwani Wilkinson, Darius Days and Efton Reid. ... Missouri was 5-of-25 from 3-point range in a loss to Vanderbilt, missing all 11 first-half attempts. ... Penn State transfer Myreon Jones made 7 of 11 3-pointers in Florida's win over Georgia, scoring a season-high 23 points. Alabama's Jaden Shackelford scored a career-high 30 in a win over Mississippi, making eight 3s. ... The Crimson Tide made 14 of 24 3-pointers (63.6%), the highest percentage under coach Nate Oats. ... Tennessee super senior forward John Fullerton played in his 153rd SEC game to become the conference’s career leader.

No. 1 South Carolina visits No. 17 Georgia in the biggest of Sunday's games. It's the second straight game against a ranked team for Georgia, which faced No. 14 LSU on Thursday night. South Carolina is 9-0 against Top 25 teams this season, winning them by an average margin of 13 points. ... Other weekend games include in-state rivalry matchups like Mississippi-Mississippi State and Vanderbilt at No. 13 Tennessee.