No. 8 Kentucky hosts No. 15 Auburn, seeking share of SEC 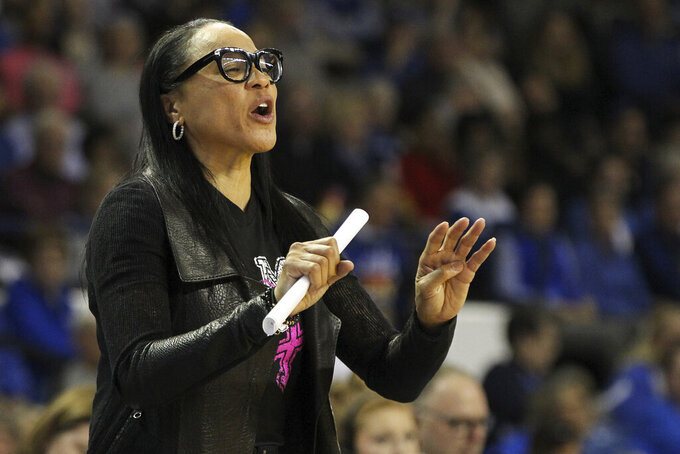 No. 15 Auburn (24-4, 11-4) at No. 8 Kentucky (23-5, 13-2): The host Wildcats have won seven in a row and can secure at least a share of the regular season SEC title with a victory. The Tigers won the first match-up 75-66 on Feb. 1, their second straight victory over Kentucky and fourth in the last seven meetings. Since that loss the Wildcats have won five times by a total of 31 points. Kentucky's streak is its longest this season and has been led by guard Immanuel Quickley, who has averaged 21.5 points during the run. Auburn forward Isaac Okoro returned for the Mississippi game after missing three straight with a right hamstring injury.

Tennessee (15-12, 7-7) has a brutal closing stretch — and also a chance to greatly enhance its postseason resume. The Volunteers close the regular season with home games against Florida and Auburn sandwiched around a visit to Kentucky. Tennessee has lost three of its last four, including an 86-69 defeat to Arkansas. The Vols will have faced the Tigers twice in the final two weeks, losing 73-66 in the first meeting. They also lost by 13 (77-64) in Round 1 against the Wildcats.

Arkansas's Mason Jones scored 37 points against Tennessee to take the SEC scoring lead over Mississippi's Breein Tyree, who had 16 in a loss to Auburn. Jones is averaging 21.1 points to Tyree's 20.4. It was Jones's seventh 30-point game of the season. ... Before going down with a right arm injury against Mississippi State, Alabama’s John Petty became the program’s fifth player to attempt 600 3-pointers in a career and now has 602. ... Texas A&M has lost nine straight against ranked opponents dating back to March 18, 2018. ... All five players in South Carolina's starting five scored in double figures for the first time this season in Wednesday night's 94-90 overtime win over Georgia. The 94 points was tied for the Gamecocks'third most under coach Frank Martin.

Immanuel Quickley is the first Kentucky player with consecutive games with at least 25 points since Malik Monk in 2017. He had career highs of 30 points — the first Wildcat to reach that mark since Shai Gilgeous-Alexander against Vanderbilt on Jan. 30, 2018 — and eight 3-pointers against Texas A&M. That performance follows his previous high of 26 points against Florida last weekend. The sophomore guard has thrived after halftime during Kentucky's winning streak, averaging 15.3 points during that stretch. Quickley had 23 points before fouling out in the first meeting with Auburn.

No. 1 South Carolina has already clinched its fifth SEC championship in the last seven seasons. That’s the most dominant run since Tennessee won or shared seven titles from 1998-2004. The Gamecocks clinched the title with a 67-58 win over Kentucky coupled with Mississippi State’s loss to Alabama. It was also coach Dawn Staley’s 300th win at South Carolina. The Gamecocks dominated the Wildcats 38-14 in the paint.

AP Sports Writer Gary B. Graves in Kentucky contributed to this report.