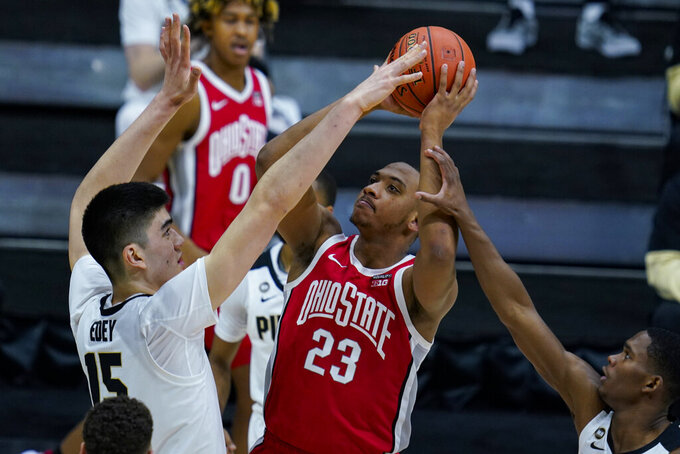 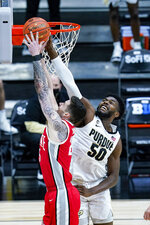 INDIANAPOLIS (AP) — Seth Towns is a natural when it comes to staying poised.

So when Ohio State coach Chris Holtmann needed an extra body to fill a key role Friday, he gave the Harvard transfer an opportunity.

Towns took full advantage of it, scoring a season-high 12 points in 11 minutes and making the tiebreaking free throw to start overtime as the ninth-ranked Buckeyes beat No. 21 Purdue 87-78 in the Big Ten Tournament quarterfinals.

Towns scored six points in OT, including a crucial 3-pointer with 2:53 left.

“Seth and I had a conversation last night and I just felt like he was going to play well tonight," Holtmann said after earning his 200th career victory. “I just felt very confident in his mindset where his head was. It’s a great, great credit to him.”

The Buckeyes (20-8) may need their graduate transfer to come up big in Saturday's semifinal matchup against No. 4 Michigan, their longtime rival and the Big Ten regular-season champs, especially if Kyle Young is out.

Young matched his career with 18 points in the first half but most of the second half after taking an inadvertent elbow to the head.

Young tried to play but eventually came out and did not return. Ohio State also finished the game without all-conference forward E.J. Liddell, who fouled out after scoring 17 points, grabbing five rebounds and dishing out five assists.

For the Buckeyes, it was another harrowing close call. Just 24 hours after Minnesota cut a 14-point lead to one in the final 3 1/2 minutes of Thursday's tourney opener, they blew an 18-point halftime lead.

“Seth is always under control and calm," Liddell said, cracking a smile. “I feel like Seth is always the level-headed one and he made the big plays, the big shots."

It was a big moment, too. Ohio State had lost both of the other games against the Boilermakers (18-9) and the victory sends them to their first semifinal appearance since 2014.

“It was on us," Boilermakers forward Mason Gillis said when asked about the momentum shift in overtime. “We missed a free throw box out, they get a layup, a runner and a 3 (from Towns) and that’s it right there.”

Ohio State: One day after snapping a four-game losing streak, the Buckeyes won another game in less than impressive fashion. Yes, they need to develop a stronger knockout punch to make a deep NCAA Tournament run. What they do have, however, is grit and depth.

Purdue: One of the Big Ten's hottest teams was doomed by a miserable first half in Indy. It's only the second loss the Boilermakers have suffered inside Indiana this season. But now they'll get some extra rest before resuming next week in one of the three Indiana cities hosting tourney action this sesaon.

Ohio State: Washington also had five rebounds and three assists. ... The victory also gives Holtmann his eighth consecutive 20-win season. The Buckeyes have won 20 in 16 of the last 17 seasons. ... Ohio State was 16 of 18 from the free throw line. ... The Buckeyes lost their only other matchup against Michigan 92-87 in Columbus on Feb. 21. ... Ohio State is now 3-0 all-time at Lucas Oil Stadium, which also hosts the Big Ten football title game.

Holtmann did not provide an update on Young's status following the game because he said he hadn't yet talked to the doctors. But when asked about why Young played four more possessions before leaving the game for good, Holtmann he'd take a second look at how it unfolded. “I’d like to look back and know the exact scenario," he said. “I think initially he said he wanted to play and so we let him. Maybe looking back, I could have pulled him. Maybe I should have."

Purdue: Will wait to see who they play when the NCAA Tournament bracket comes out Sunday.