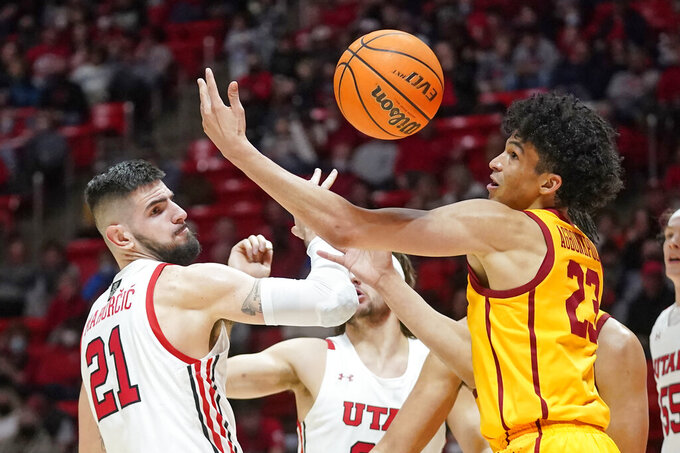 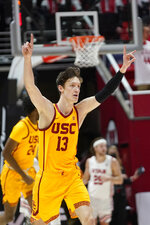 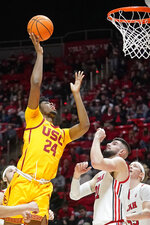 “I don’t think I’ve ever shot it like this. I was feeling good and my teammates were finding me,” Peterson said.

Peterson scored 23 points and Boogie Ellis added 18 to power No. 16 Southern California past Utah 79-67 on Saturday.

“The ball was moving. Having 18 assists after just six (in a win at Colorado on Thursday) showed a big difference,” Peterson said.

Peterson made all five of his 3-point attempts and went 9-for-10 from the field in addition to grabbing seven rebounds.

“Teams have been going underneath my screens a little bit recently, knowing I want to get into the paint. So I’m trying to keep them honest by shooting the open 3s,” Peterson said.

“I don’t think this team is as good as Paul Westphal’s team. That was one of the greatest teams in USC history. But I love our team. We played hard and play well together,” USC coach Andy Enfield said.

Now at full-strength in his initial injury-riddled season, Gabe Madsen had a career-high 20 points for Utah (8-12, 1-9).

“I kind of expected this. I put in a lot of work and I have prided myself as a gym rat. Today, opportunity met preparation,” said Madsen, who has been recovering from a collapsed lung.

Lazar Stefanovic scored 10 for the Utes, who have lost eight straight.

The Trojans’ height bothered the Utes around the rim and their quickness disrupted the Utah offense. A 42-31 rebound disparity helped give the Trojans 15 second-chance points and 40-20 advantage on points in the paint.

“There’s nothing USC doesn’t have. They have great point guard play, great athleticism up and down the lineup, elite size and versatility. When you make mistakes, they make you pay,” Utah coach Craig Smith said.

“It wasn’t easy and it’s tough coming to the mountains but I’m very proud of our team for regrouping after a tough week last week. We came back with the type of defense we expect out of them,” Enfield said.

Branden Carlson, Utah’s leading scorer, is nearing a return but sat out and has now missed five games due to appendicitis.

USC: The Trojan offense wasn’t exactly a smooth-running machine but it was enough, especially when Peterson heated up and they got a few easy fast break points in the second half. The USC defense was suffocating nearly all game and held Utah to 36-percent shooting.

Utah: The Utes honored Wat Misaka, a member of Utah’s 1944 NCAA and 1947 NIT title teams, a Japanese American who passed away in 2019. Playing for the New York Knicks, Misaka was the first non-white player in the Basketball Association of America, the precursor to the NBA. Even recent glory days of Utah seem far away when comparing skill against a team like USC, but the Utes still play hard amid the mounting losses.

The Trojans ranked as high as No. 5 before losing conference games to Stanford and Oregon, but a rare mountain sweep of Colorado and Utah may give the Trojans a boost back toward the top 10.