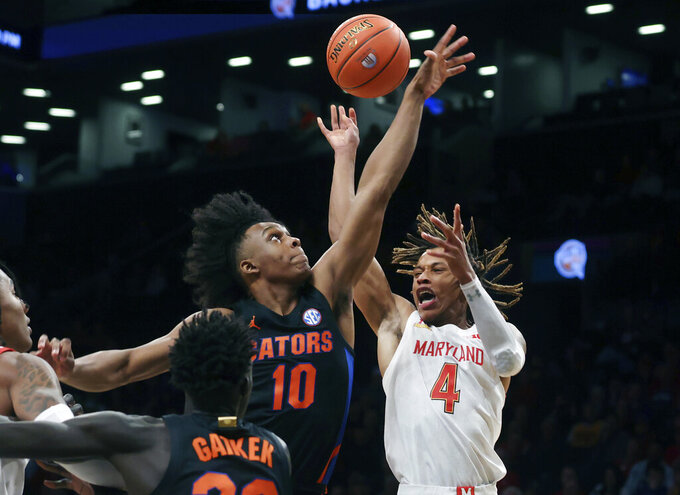 Maryland's Fatts Russell (4) has the ball knocked away by Florida's Elijah Kennedy (10) during the first half of an NCAA college basketball game Sunday, Dec. 12, 2021, in New York. (AP Photo/Jason DeCrow) 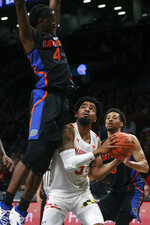 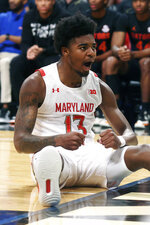 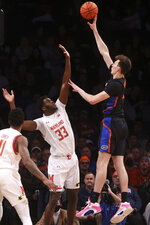 NEW YORK (AP) — Donta Scott scored on a leaning shot in the post with 16.8 seconds left, No. 20 Florida missed its final-play 3-pointer, and Maryland beat the Gators 70-68 on Sunday night in the Basketball Hall of Fame Invitational.

Eric Ayala and Fatts Russell each scored 19 points for the Terrapins (6-4), who shot 49% and hit 8 of 13 3-pointers to snap a three-game skid. It also marked Maryland's first win in two tries under interim coach Danny Manning, who took over Dec. 3 after the school announced Mark Turgeon had stepped down in what it described as a mutual decision.

Maryland led by as many as seven with 6 1/2 minutes left before a tense finish, with Florida's Tyree Appleby going for the win on a stepback 3-point attempt over a contesting Xavier Green. But the shot was long, with the ball hitting the back iron as the horn sounded.

“I loved the resiliency of our guys,” Manning said. “I thought there were times when things aren’t going our way. … But our guys found a way to stay together and they fought, and that gave us a chance.”

Appleby scored 15 points on five 3-pointers, including one against Russell with 1:14 left that pushed the Gators (7-3) to a 66-65 lead. Florida also got a tying layup from Anthony Duruji with 43.5 seconds left, setting up Scott's tough shot against Myreon Jones in the post for the win.

“We weren't sharp enough defensively to guard a high-level backcourt like that the way they were playing," Gators coach Mike White said of Ayala and Russell. "They were incredibly efficient. ... Our pressure overall did a good job on those guys collectively but I thought those guards handled it.”

Florida: The Gators had a jarring start to the week, losing at home to previously winless Texas Southern by 15. They rebounded with an easy home win Wednesday against North Florida, though Florida was likely headed out of Monday's new AP Top 25 poll before this close loss.

Maryland: The Terrapins were trying to avoid their first four-game skid since the 2004-05 season. The school said that's the only one of that length dating to the 1993-94 season.

Florida: The Gators face South Florida on Saturday in the Orange Bowl Classic in Sunrise, Fla.

Maryland: The Terrapins have an extended break and don't play again until hosting Loyola Maryland on Dec. 28.